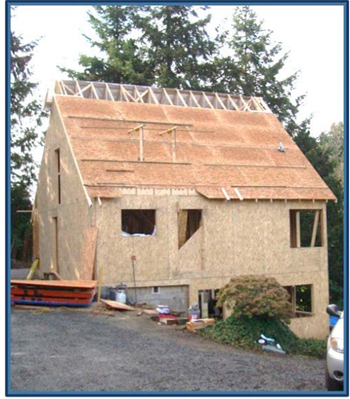 In February of 2016, a 53-year-old framer died when he fell 18 feet from the residential roof he was sheathing.

He had worked for his employer, a construction company specializing in home remodeling, on several projects and had been on this project for nearly a month. He was a licensed contractor with 30 years’ experience.

On the day of the incident, the victim and another worker began work at 7 a.m. They were working on a new two-story single-family residence project. The victim’s job was to finish sheathing the roof.

The victim used a ladder to access the 12/12 pitch roof and began installing sheathing. The other worker went to work in the building’s basement and the employer left the site to get building materials. 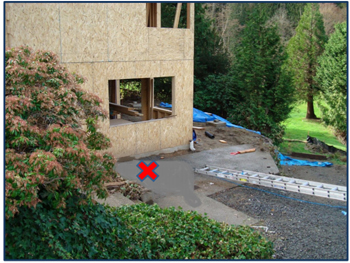 Incident scene showing where the victim landed (indicated
by “X”) on a concrete surface after falling 18 feet from the
roof. As he fell he knocked down the unsecured ladder.

A light rain began to fall. A few minutes later, the worker in the basement heard the victim sliding down the roof, then saw him fall head first onto the concrete walkway 18 feet below. He called 911 and then began CPR on the unconscious victim.

Emergency responders arrived on the scene and attempted to revive the victim, but were unsuccessful.

Washington State Department of Labor and Industries’ Division of Occupational Safety and Health (DOSH) investigators determined that in this instance, the victim was an employee, not a subcontractor.

To view the slideshow version of this narrative, click here.