A 40-year old crane operator was killed when a 35-foot (5600 lb) H-beam fell crushing the crane cab and striking him in the head. During a pile driving operation, the H-beam pile had been placed in a drilled 25-foot hole. While using a vibratory hammer to force the pile further into the hole, the pile shifted. After several failed attempts to correctly position the pile, it was extracted using the hydraulic clamp of the vibratory hammer and moved 12 feet from the hole. It was held in a vertical position with the bottom of the pile resting on the ground. The clamp holding the top of the pile released unexpectedly. The pile was not rigged to the clamp housing or attached to the whipline. The 5600lb pile fell, struck and crushed the crane cab, and killed the operator.
January 2016 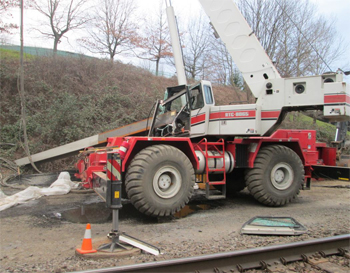 A 40-year old crane operator was killed when a 35-foot (5600 I b) H-beam fell crushing the crane cab and striking him in the head. During a pile driving operation, the H-beam pile had been placed in a drilled 25-foot hole. While using a vibratory hammer to force the pile further into the hole, the pile shifted. After several failed attempts to correctly position the pile it was extracted using the hydraulic clamp of the vibratory hammer and moved 12 feet from the hole. It was held in a vertical position with the bottom of the pile resting on the ground. The clamp holding the top ofthe pile unexpectedly released. The pile was not rigged to the clamp housing or attached to the whipline. The 5600 lb pile fell, struck and crushed the crane cab, and killed the operator. 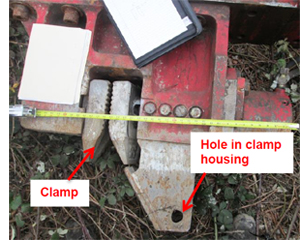 Figure 2. Close up of the vibratory hammer clamp housing.

On February 17, 2015, a crane operator was struck in the head when an H-beam pile that was held in a vertical position by a vibratory hammer clamp, fell, crushed the crane cab, and killed the operator. OR-FACE contacted OR-OSHA after hearing a local news report to confirm incident. OR-FACE completed the investigation report by obtaining the OR-OSHA field investigation documentation, medical examiner reports, police reports, and follow-up interviews with the OR-OSHA investigator and vibratory hammer manufacturer.

The employer, a company specializing in crane rental, rigging, pile driving and heavy hauling for nearly 13 years, was a subcontractor hired to install piles for a retaining wall being constructed along a section adjacent to the railroad tracks (railroad right-of-way). The company employed approximately 40 union workers. On the day of the incident, a six-person crew was assigned to the pile driving project.

A 35-foot, 5600-lb H-beam pile was lifted and set vertically in a 25-foot newly drilled hole. The pile sank a few feet into the hole and was supported by the walls of the hole. A hydraulic vibratory hammer was then attached to the crane rigging and swung into place over the pile. Using a hand-held wireless remote control a hydraulic clamp on the base of the hammer was opened by the foreman and dropped over the pile then closed. The crane operator repositioned the pile while clamped onto the vibratory hammer. The foreman remotely started the vibrating action of the hammer to push the pile further down into the hole. 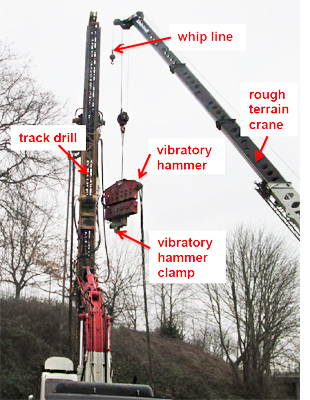 The crew noticed that the pile shifted and was several inches off center. After several unsuccessful attempts to correctly position the pile, a decision was made to stop the vibratory hammer, completely extract the pile, and re-drill the hole. The pile, still attached to the vibratory hammer hydraulic clamp, was lifted out of the hole and vertically positioned approximately 12 feet to the side of the hole. The bottom of the pile was resing on the ground with the clamp of the hammer holding it in a vertical position. A track drill was moved into position to re-drill. When re-drilling began, the clamp holding the top of the pile unexpectedly failed, releasing the pile which struck the crane cab and the operator.

The 40-year old crane operator had worked for the employer for three years and was a member of the local operating engineers union. He had completed training and was NCCCO (National Commission for the Certification of Crane Operators) certified to operate a telescopic boom crane-fixed cab (TSS) and telescopic boom crane-swing cab (TLL) in 2012. In the same year he completed an OSHA 10-hour class. In 2013, he completed the employer crane competency test.

The employer was contracted to install steel H-beam piles as vertical structural members for a new retaining wall. A six person crew was assigned to the project. Work began at 6:45am on February 17, 2015, with a safety meeting that included the crew, general contractor and customer. 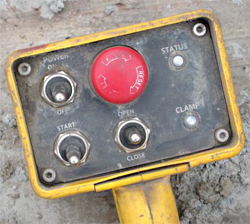 The crane operator positioned a 65-ton Link-Belt Rough Terrain crane to pick up a 35-foot, 5600-lb pile with a quick release coupler device attached to the lifting block of the crane and one end of the pile. The pile was moved, swung over and set vertically in the newly drilled hole and supported by the walls of the hole. The crane's rigging was then slacked and the pile was released by workers pulling release ropes attached to the quick coupler device.

A hydraulic vibratory model MKT V-17 /HP-325 hammer (MKT Manufacturing Inc., St. Louis, MO) was then attached to the crane rigging and swung into place over the pile. The vibratory hammer was built in 1979, and was powered by a diesel driven, hydraulic power unit with a 150-foot hydraulic hose bundle. It was originally operated through a control panel located on the power unit or remotely with a 50-foot electrical control pendant cable assembly. However, the employer had contracted a company to design and supply a wireless remote control (see Figure 4) to replace the pendant device. The design options for the remote control included an optional safety finger trigger that must be activated before any vibratory hammer action controls would function. However, this "safety trigger" (see Figure 5) option was not selected for the wireless remote control unit that was ultimately used during the incident.

Figure 5. Drawing with the safety trigger
option on controls.

The foreman using the handheld wireless remote control (see Figure 4) opened the clamp on the base of the hammer. The open clamp was dropped over the web of the H-beam pile then closed remotely. The crane operator repositioned the pile by lifting it while clamped to the vibratory hammer to straighten it while in the hole. The foreman then started the vibratory hammer using the remote control.

After vibrating the pile down into the hole, the crew noticed that the pile had shifted and was several inches off center. After several unsuccessful attempts to center the pile, the foreman stopped the vibratory hammer. He made the decision to extract the pile and re-drill the hole before the concrete could set

The project was behind schedule, it was late in the day, and concrete was beginning to set. These factors may have contributed to the decision to act quickly and forego a hazard assessment to ensure a safe lift for this last minute change in plan.

The pile was extracted while it was clamped to the vibratory hammer. The pile did not have a safety chain or line connecting it to the vibratory hammer housing nor was the crane's whip line attached to the pile. The pile was lowered approximately 12 feet away from the hole and set in a vertical position with the lower end resting on the ground. The track drill was then moved back into position and the crew began re-drilling. The crew worked within the fall zone of the pile. At approximately 5:30pm the vibratory hammer clamp unexpectedly released the pile which fell, struck the crane cab and killed the operator. 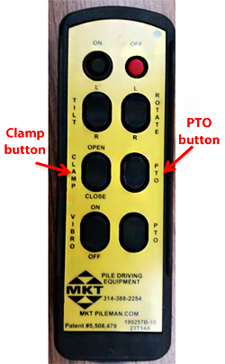 Although the reason for release could not be determined, three possible scenarios were identified through investigation.

'When the clamp inadvertently opened, the pile fell onto the crane cab. There was no line attached to the pile to restrain the fall as recommended by the manufacturer. The manufacturer's Operation, Maintenance and Parts Manual stated that, "pile extraction operations are frequently fitted with a shackle and a short line attached through the hole drilled in the pile clamp housing... and the shackle is fastened into the lifting hole in the pile." Figure 2 shows the hole in the pile clamp housing. In the same paragraph, the manual directs how to extract and store the pile, "The pile is then pulled out of the ground, and the hammer and pile swung to where the pile will be stacked. The lower end of the pile is set on the ground and the... hammer jaws are opened allowing the pile head to fall away from the jaws and hang by the line and shackle. The hammer and dangling pile are lowered to the ground where the shackle is disconnected from the pile." (MKT Operating, Maintenance & Parts Manual, p.16)

Other vibratory hammer manufacturer's emphasized, "pile handling/safety line should be used to attach the pile to the hammer should the clamps suddenly lose hydraulic pressure," (see ICE manual). APE (American Pile driving Equipment) listed in their rules and precautions, "attach whip line to pile when pulling."

Employer documents collected in the investigation revealed a similar event three years before this incident. No one was injured when a pile slipped out of the clamp, fell and damaged heavy equipment. The employer had documented the incident, determined that the clamp teeth were worn on one side and stated in their accident report, "vibe needs jaws make sure that we keep pile choker on pile."

Recommendation # 2: Employers should consult the equipment manufacturer prior to modification or addition to equipment. The wireless remote control that replaced the original pendant control may have unexpectedly opened the clamp and released the pile.

Recommendation # 3: Employer should ensure that workers are trained on the hazards of equipment and follow manufacturer's operating manual (e.g., bleeding entrained air from the line to prevent clamp failure).

Recommendation # 4: Employers should ensure that a risk assessment is conducted whenever a change-in-plan occurs and workers should be encouraged and reinforced for reporting unsafe conditions and participating in implementation of hazard controls.

Recommendation #5: Incident investigations should include a root cause analysis to identify hazards, recommended actions to control these hazards and follow-up procedures to ensure that these actions are implemented.

Oregon Fatality Assessment and Control Evaluation (OR-FACE) is a project of the Oregon Institute of Occupational Health Sciences at Oregon Health & Science University (OHSU). OR-FACE is supported by a cooperative agreement with the National Institute for Occupational Safety and Health (NIOSH) (grant #2U60OH008472-06) through the Occupational Public Health Program (OPHP) of the Public Health Division of the Oregon Health Authority. OR–FACE reports are for information, research, or occupational injury control only. Safety and health practices may have changed since the investigation was conducted and the report was completed. Persons needing regulatory compliance information should consult the appropriate regulatory agency.