CPWR researcher proposes a national goal of fewer than three deaths per 200 million man-hours of work in the US construction industry. The goal is based on international comparisons as well as contemporary accident rates reported in the United States.
1995

1. Reported deaths in construction: rates and construction as a percentage of total, selected countries, 1992
2. Estimates of cost reductions if proposed goal is met, in 1993 figures
3. The main safety and health hazards for the construction worker

Research to date in the United States has produced enough data to enable us to begin to establish a national goal -- or benchmark -- for safety and health for the industry.

At present, the industry should be able to achieve the following levels:

Deaths. Work-related death rates from injury in construction vary greatly among nations (table 1).3 The Netherlands, with a rate of 3.3 appears to have the best record. Given the achievement in that country, it should be possible to operate a construction industry with fewer than 3 work-related deaths per 200 million hours worked.

Injuries There is growing evidence to support the goal of less than 1 lost-time injury per 200,000 hours worked (which in the United States equals a rate of 1 per 100 full-time-equivalent workers). 4The National Constructors Association (NCA) comprises the largest union contractors in the United States, who support about 140 million hours of construction work annually. NCA members' reported lost-time injury rates are below 1 per 200,000 hours and are less than 20 percent of the national average reported by the US Bureau of Labor Statistics (figure 1). 5The US Army Corps of Engineers is responsible for arranging much of the heavy construction that is performed for the federal government. Although the lost-time injury rate for Army Corps projects in some years has exceeded 1, the average composite rate for 1988-94 was below 1(figure 2).6

Projected Effect on Injuries and Deaths


Using 1991 figures as a baseline, achievement of the goal would produce these changes annually for workers in the United States: 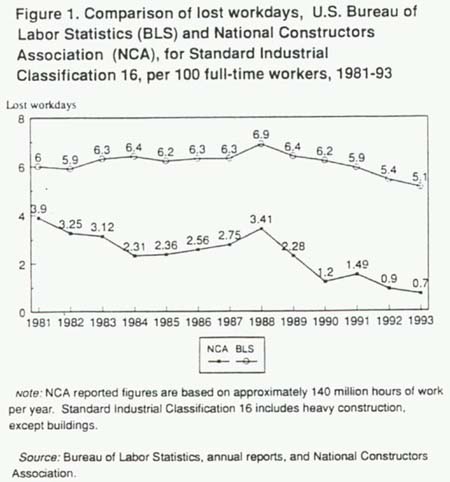 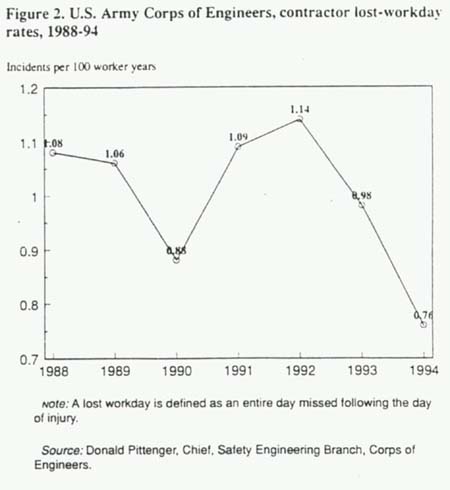 
We estimate that if this goal is achieved, the savings from reduced workers' compensation costs alone will range from $9 billion to $13 billion per year. This translates to a saving of $1.25 to $1.75 per worker per hour -- roughly 8 to 12 percent of the average construction wage of $14.66 hourly (table 2).

Estimates for the indirect costs associated with serious injuries include job shutdowns, paper work, litigation, lost production, reduced productivity due to changes in teams, and retraining of workers. These estimates suggest that reduced indirect costs would at least double the total savings. 8

How To Achieve the Goal

In 1993, the National Conference on Ergonomics, Safety, and Health in Construction, in Washington, D.C., reviewed the state of knowledge and identified priority areas in safety and health (table 3).

Table 3. The main safety and health hazards for the construction worker

Source: CPWR – Center for Construction Research and Training, based on reports from the US Bureau of Labor Statistics and Bygghälsan, the Swedish Construction Industry Organization for Working Environment, Occupational, Safety and Health.

The conference also identified the key decisionmakers who need to be mobilized if this agenda for change is to be implemented industry wide. They are employers, construction owners, union leaders, government officials, workers' compensation insurance executives, academic investigators, and architects and designers.

Prospects for Achieving the Goal


As noted above, the proposed goal is practicable. But does that mean that we can expect it to be applied throughout the industry?

When lost-time injury rates are examined by size of firm, the larger employers have a markedly lower rate (figure 3). The largest employers in the National Constructors Association, on average, already operate at a rate that is roughly half the rate of the proposed goal. The real issue is to improve performance among small-to-medium employers.9 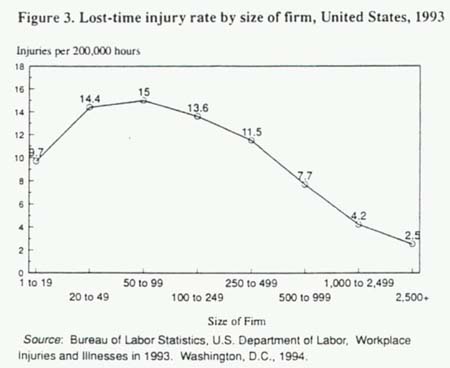 BLS has data, from 1990 to 1993 (figure 4). This is a startling decline, which is not replicated in other industries and which cannot be explained by unrelated factors, such as the business cycle. It seems most likely that this decline has resulted from a series of events that have increased safety awareness in the industry. We are seeking to verify the factors, but they may include:

This proposal does not conflict with other guidelines, such as the zero-accident philosophy. The zero-accident work environment is an ideal. Rather, this goal attempts to establish what is feasible. In this respect, the proposal does two things. First, it responds to the basic requirement in the establishment of any safety standard: it demonstrates technological and economic feasibility. Second, it departs from the traditional approach to setting safety and health standards, which is rooted in engineering, and instead uses a public health approach, which focuses on injury rates as a measure of performance.

Some caveats or refinements to this goal need to be addressed. First, there are inconsistent definitions for a lost-time or lost-workday case, depending on the research organization or jurisdiction. OSHA is trying to address this problem, in its proposals to revise record keeping requirements of employers for injuries and illnesses. Second, some sectors of the industry with highly specialized work, such as structural steel erection, may require separate goals.

In addition, chronic disease outcomes are greatly understated, even when illness rates are reported to BLS.15 Most occupational illnesses cannot be counted by employers in general, and by employers in construction in particular, because of the long time such illnesses usually take to develop and the multiple causes of most illnesses. And in construction, the temporary nature of much employment makes it difficult to track individual worker exposures to hazards -- and individual workers.

Industry wide achievement of the proposed goal would require great strides. In spite of the remarkable improvements in safety in the US construction industry, the goal is at a level one-fourth of current industry lost-time injury and work-related-death rates. Thus, any expectation of immediate achievement of the goal would be unrealistic. Still, if there is one characteristic that typifies construction, it is its ability to adapt rapidly to change.

As has been shown, large construction contractors already operate at or close to the proposed goal. The real issue is finding ways to broaden our focus and direct our attention to small-to-medium employers, which in the United States exceed 425,000 in number. 16If we can create an environment where this part of the industry moves toward broad adoption of a safety culture much like the one large employers are developing, the goal should be achievable.

We believe the labor unions serve a pivotal role in this respect, because it is the collective bargaining agreements -- and multiemployer benefit programs created under them -- that enable employers to sustain themselves in an industry where the levels of employment vary markedly. The move toward increased union-employer cooperation in safety and health in our industry probably provides the greatest potential to move the industry toward the goal proposed here.