Section 3: Payroll and Nonemployer (without Payroll) Establishments in the Construction Industry

The U.S. Census Bureau's definition of "establishment" for nonemployer (known as "without payroll," see Glossary) is one that has no paid employees, has annual business receipts of $1,000 or more ($1 or more in the construction industry), and is subject to federal income taxes. The Census Bureau excludes establishments from this category if they have receipts above a predetermined cutoff of $1 million for corporations and partnerships and $2 million for service-type industries, assuming that they have paid employees. (For sole proprietorships, the Census Bureau's cutoff varies greatly depending upon industrial classification.)

Each distinct business income tax return filed by a nonemployer business is counted as an establishment. Nonemployer businesses may operate from a home address or a separate physical location. Nonemployers are typically self-employed individuals and they are not surveyed in the Economic Census. Instead, administrative data are compiled from the annual business income tax returns filed with the Internal Revenue Service (IRS) and maintained in the Census Bureau's Business Register. The nonemployer statistics have been released as an annual data series since 1998, separate from the Economic Census reports.

The proportion of nonemployer establishments varies by state. In 2002, establishments without payroll made up 80% or more of all construction establishments in the following nine states (in decreasing order): Tennessee (at 86%), Texas, Mississippi, Arkansas, Kentucky, Oklahoma, Louisiana, Alabama, and Georgia (chart 3d). 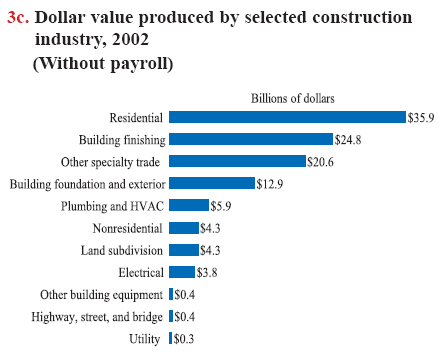 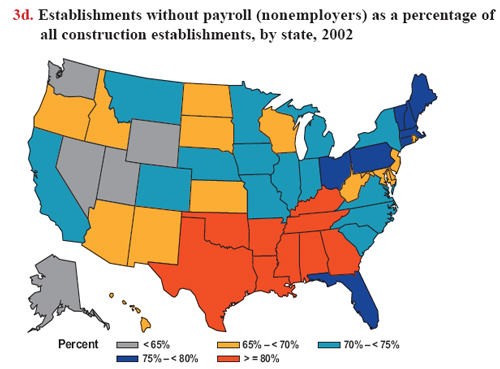 Note: All charts - Because some classifications have changed with the adoption of the 2002 North American Industry Classification System (NAICS), numbers provided cannot be directly compared with charts in The Construction Chart Book, Third Edition, which used the 1997 NAICS system.

Chart 3a - Data covers the private sector only. Figures may not add up to totals because of rounding. In 2002, payroll establishments totaled 710,307, with 7.2 million employees.