Employment growth will differ among construction occupations (chart 30b). Almost 543,000 (12%) of new wage-and-salary jobs are expected to be added to the Standard Occupational Category Construction and Extraction occupations (SOC 47-0000) in 2004-2014.2 Employment of heating, air-conditioning, and refrigeration mechanics and installer workers is projected to grow faster than any other occupation in this major group, adding more than 39,000 new jobs. Roofers, another fastgrowing occupation, are projected to add over 21,000 new jobs. The number of construction laborers is expected to increase by 14,000 by 2014.

Employment of construction managers is expected to grow as a result of advances in building materials and construction methods which would, presumably, require more oversight, as well as a proliferation of laws dealing with building construction, worker safety, and the environment. The numbers – and proportion – of office and administrative support staff are expected to decline slightly, because of increased office automation.

The U.S. Bureau of Labor Statistics (BLS) projects employment for a 10-year span every other year in odd-numbered years. Self-employment is estimated separately. While the BLS employment projections profile future job demands, a new BLS quarterly series – the Business Employment Dynamics (BED) – tracks changes in net growth of employment by measures of gross job gains and gross job losses (see Glossary) at the establishment level.3 The BED statistics are generated from the Quarterly Census of Employment and Wages, or ES-202 program, covering approximately 98% of all employment except for the self-employed. When gross job gains and losses are compared, the construction industry exhibited net job gains between 1995-2005, reflecting the expansion of construction employment (chart 30c).

Both the projected employment data and the BED statistics measure "net" employment changes, but do not reflect the underlying dynamic flow of hires and separations that occurs within industries. Another BLS data collection tool – Job Openings and Labor Turnover Survey (JOLTS) – completes the labor market picture by collecting monthly data from a large nationwide sample of establishments to measure unmet labor demands and job turnovers.4 JOLTS data include total employment, job openings, hires, and separations, providing indicators of labor shortages at the national level. JOLTS data show that the construction industry has a high number of separations (chart 30d). Every year, about 4.5 to 4.8 million (60-70%) of wage-and-salary construction workers left their employment voluntarily or involuntarily, much higher than 41 – 46% for all industries on average. Separations include quitting (which accounts for the largest portion, more than 40%), layoffs or discharges, retirement, and disabilities. The number of hires float and overlap with the number of separations month to month, but the overall hires are slightly lower than separations – 28.0 million separations versus 27.8 million hires across the same time period. Although the unmet job demand in construction varied concurrently with the economic cycle (the lowest point of job openings was 55,000 in September 2003, and the highest point was 170,000 in December 2005), on average, more than 100,000 job openings (see Glossary) were left unfilled every month from 2001 through 2006 (chart 30d). The number of unfilled job openings is an important measure of the fluctuations of job markets and labor shortages. As the baby-boomer generation moves out of the labor force (see chart book pages 12 and 13), the construction industry will continue to face a labor shortage and, in particular, shortages of skilled craft workers.5 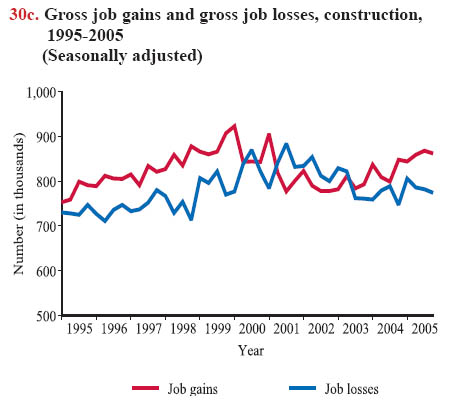 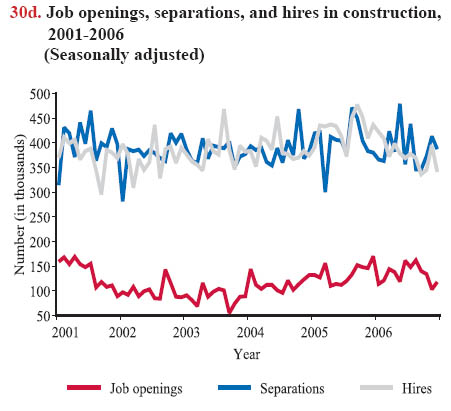 Note:
Charts 30a and 30b - Employment projections include all occupations, but not the self-employed.