Section 27: Employment-based Retirement Plans in Construction and Other Industries

Although the need for retirement plans has become a topic of much discussion in recent years, construction workers are less likely than workers in most other industries to be eligible for – or participate in – an employment-based retirement plan. In 2005, 39% of wage-and-salary construction employees were eligible for an employment-based retirement plan, yet 33% of such workers participated in a plan (chart 27a).1 The results are consistent with previous findings from the Survey of Income and Program Participation.2

These estimates are based on the 2006 Current Population Survey (CPS) Annual Social and Economic Supplement (March Supplement, formerly the Annual Demographic Supplement). The CPS surveys households, not businesses, and asks respondents if they are offered an employer- or union-provided retirement plan, if they are eligible to join, and if they participate. The CPS data do not collect information on the type of plan, so data could refer to plans with employer contributions or 401(k) plans funded solely by an employee's personal contributions. The CPS does not ask reasons for nonparticipation in employment-based plans, but there are two possible explanations: 1) an employee is not eligible because a job project or position is not covered or the employee has not been on the job long enough, or 2) an employee chooses not to participate because the plan requires employee contributions.

The unionized construction trades typically use a multi employer plan model to fund retirement. Contractors that have signed a collective bargaining agreement with a building trades union pay into a fund managed jointly by trustees from the union and the employers, using investment advisors to guide their decisions. These multi employer plans can offer several types of retirement plans: 1) defined benefit plans,* or traditional pension plans to which the employer contributes, 2) defined contribution plans,* such as 401(k) plans, and 3) annuity plans. Multi employer plans are common among organized employers that hire workers who change employers frequently, which occur in construction, trucking, grocery stores, and garment manufacturing.

Non-union employers operating as single employers in the construction industry can offer the same types of retirement options as multi employer plans, as well as profit-sharing and stock plans.

Overall, 93% of the employment-based retirement plans in the United States were defined contribution plans and 61% of participants had such plans. Over the past three decades, the private retirement system has shifted from defined benefit plans (traditional pensions) to defined contribution plans (principally the 401(k) plan), and the burden of financing retirement plans has shifted from employers to participants.3,4 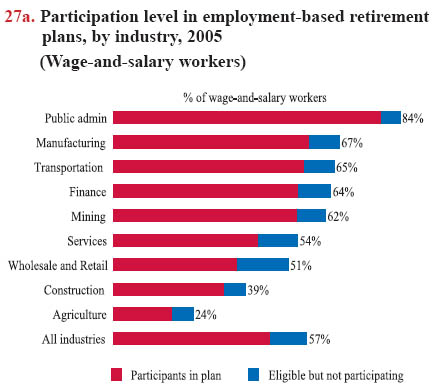 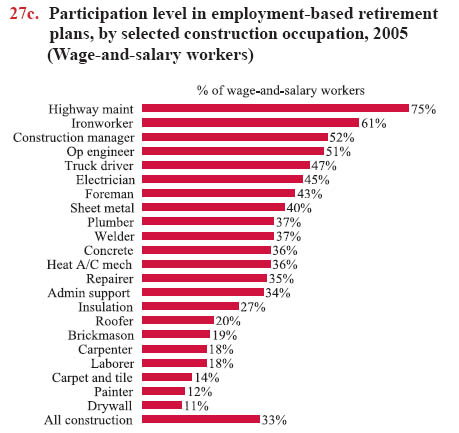 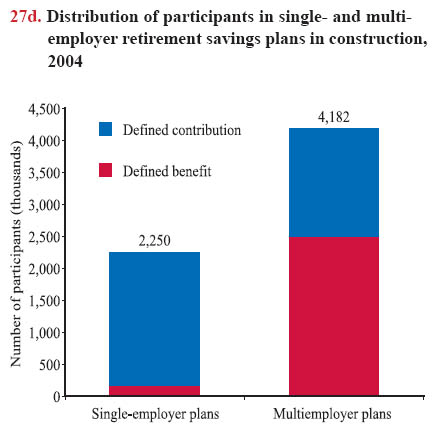 1. The numbers used in the text (except where noted otherwise) are from the U.S. Census Bureau, 2006 Current Population Survey (CPS) Annual Social and Economic Supplement. Calculations by CPWR Data Center.

Note:
Charts 27a, 27b, and 27c - Employees were counted if they were eligible for an employment-based retirement plan during the previous calendar year.

Chart 27b - Production workers are all workers, except managerial, professional (architects, accountants), and administrative support staff – and include the self-employed