For women workers in construction production occupations, as for men, union pay is roughly 1.5 times higher than nonunion pay (chart 24b). The average wage difference between women and men in the union sector is 9% compared with 14% in the non-union sector.

Other workers in construction who are union members earn a higher hourly wage, on average, than non-union workers. The average wage difference between Hispanic and white, non- Hispanic workers in the union sector is 9% compared with 19% in the non-union sector (chart 24c). Similarly, unionized minority workers earn a higher wage, on average, than their counterparts who worked in nonunionized construction sectors (chart 24d). 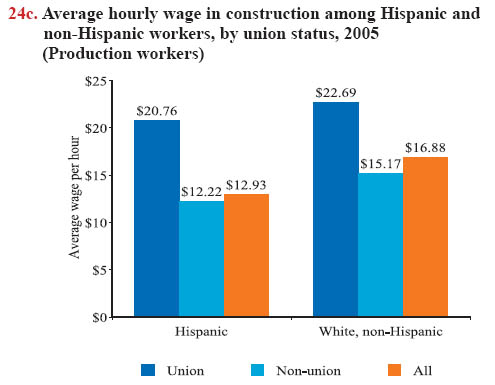 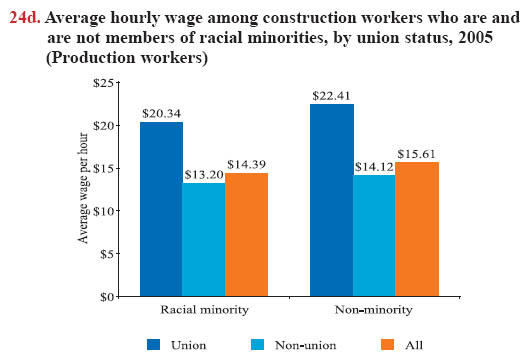 Note:
All charts - Production workers are blue-collar workers – all workers except managerial, professional (architects, accountants, and so on), and administrative support staff. (The self-employed are excluded from these charts, which cover only wage earners.) The wage is what a worker reports as his/her hourly rate of pay, excluding overtime pay, tips, or commissions. Data include all hourly wage earners whose wages were greater than zero, among survey respondents who said it was easier to report their pay on an hourly basis. The estimates are based on the selfreported data in the Current Population Survey. Thus, they are not comparable to estimates on chart book page 23. The calculations do not take into account occupational and other differences.

Chart 24a - The U.S. Bureau of Labor Statistics divides the United States into these regions: