Section 14: Foreign-born Workers in Construction and Other Industries

These statistics are from the American Community Survey, the largest household survey in the nation, with an annual sample size of about 3 million households. This survey is a part of the Decennial Census Program, a census that takes place every 10 years and next will be conducted in 2010. The survey is a new approach designed to gather accurate and timely demographic information, such as age, gender, race, and ethnicity, as well as socioeconomic indicators, including education, residence, birthplace, language spoken at home, employment, and income, on an annual basis for both large and small geographic areas within the United States.

The survey defines foreign-born persons as those who reside in the United States but who were born outside the country, or one of its outlying areas, to parents who were not U.S. citizens. The foreign-born include legally-admitted immigrants, refugees, temporary residents such as students and temporary workers, and undocumented immigrants. The survey data, however, do not separately identify the number of persons in each of these categories.

The pace of growth in the foreign-born population was much faster in the decade since 1995 than in previous years. Onehalf of all foreign-born construction workers surveyed in 2005 entered the United States since 1995 (chart 14d). Although there is no universally accepted method of estimating, it is reported that there were 7 to 11 million unauthorized immigrant workers in 2005.2,3 In addition, large numbers of immigrant workers were employed in the "informal" economy (such as some day-laborer hiring sites), and their economic activities are not recognized, regulated, or protected by law.4,5

These immigration trends are expected to continue. Almost one-third of the current population growth in the United States is caused by net immigration, or more people immigrating than emigrating. It is projected that about 86% of the population growth during the year 2050 may be due to the effects of post- 1992 net immigration.6 The large and rapid growth of immigration provides a vigorous workforce to the construction industry and presents distinct challenges as well. It has been frequently reported that immigrants have higher rates of fatalities and injuries on the job.5 There is an urgent need to develop innovative strategies to address their health and safety. 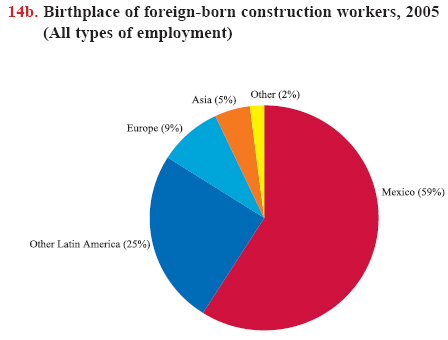 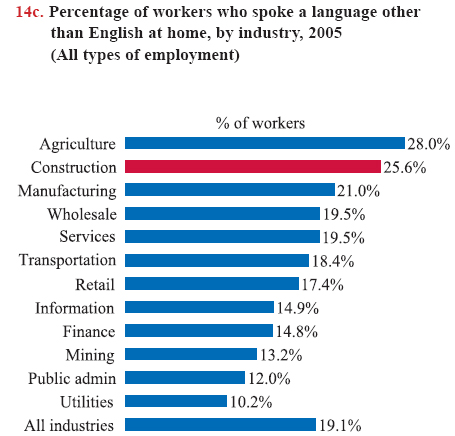 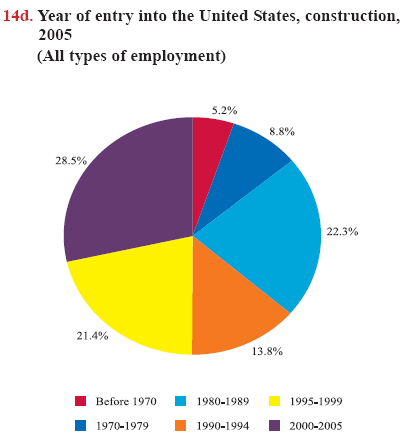 Note:
Chart 14b - "Other" world areas include North America, Africa, and Oceania (islands in the Pacific Ocean and vicinity).