Section 12: Worker Age in Construction and Other Industries

The labor force in the United States is rapidly growing older. The average age of the national labor force jumped from 37.3 to 40.6 years of age between 1985 and 2005, while median age rose from 35 to 41 years old.1(The median is the midpoint; half the workers are older and half are younger.) This aging trend is expected to influence both construction employment and the economy overall; this trend portends significant labor and skills shortages.

The relatively earlier exit of the baby boomers in construction from the prime-aged workforce will have a profound effect on this industry. A considerable number of workers are needed to replace jobs vacated by retirees and jobs created from industry expansion (see chart book page 30). The baby-busters, born 1965-76 who are already active in the labor market, may not be able to fully fill positions left by retired baby boomers due to their much lower birthrate than the boomers. The large number of new immigrants (such as Hispanic immigrant workers) has partially diminished the labor shortage in construction, but many of them have a lower educational level (see chart book page 28) and are employed in lower-skilled jobs (see chart book page 16). Therefore, skills shortages in particular will continue to be a challenge to the construction industry in the next decade.

Looking to the future, the population over age 65 will climb dramatically in the coming decades. According to projections, the number of workers aged 65 and older will more than double by 2050, from 3.5% to 7.4% of the overall workforce,3 as people work longer, due in part to reform of Social Security retirement benefits.4 The growth of the older population combined with the increased participation rates among the elderly will cause the workforce to age continually until 2020 (chart 12d). This trend will bring increased attention to issues related to delaying retirement, retiree health benefits availability and affordability, longterm care, and income production in retirement.5 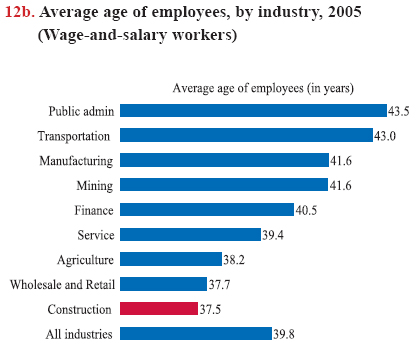 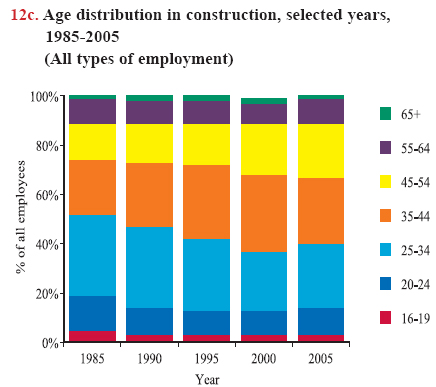 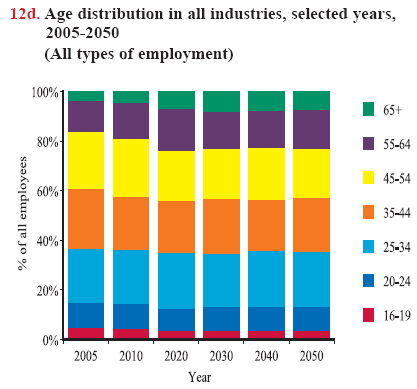 
1. All the numbers used in the text, except for those with special notes, are from the 2005 Current Population Survey. Calculations by CPWR Data Center.