Section 11: Union Membership and Density in Construction and Other Industries

These statistics are from the Current Population Survey, which includes two questions about union membership and coverage. First, the survey asks, "On this (main) job, are you a member of a labor union or of an employee association similar to a union?" Respondents who answer "no" are then asked, "On this job, are you covered by a union or employee-association contract?" The survey asks these questions of wage-and-salary employees only.

Union membership in construction varies as well among construction occupations (chart 11c) and geographic areas. Five states had an average union membership rate from 2003 to 2005 of more than 30% – with Minnesota, New Jersey, Alaska, Hawaii, and Illinois listed in increasing order (chart 11d).

Unlike this chart book, most publications refer to union density among private-sector wage-and-salary workers only. And, because the Current Population Survey interviews people who have permanent addresses and telephone numbers, it may miss some transient workers, of whom a large proportion works non-union. As a result, union density figures provided here may be slightly higher than presented elsewhere. 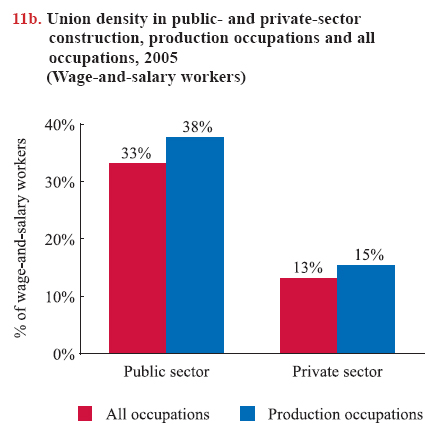 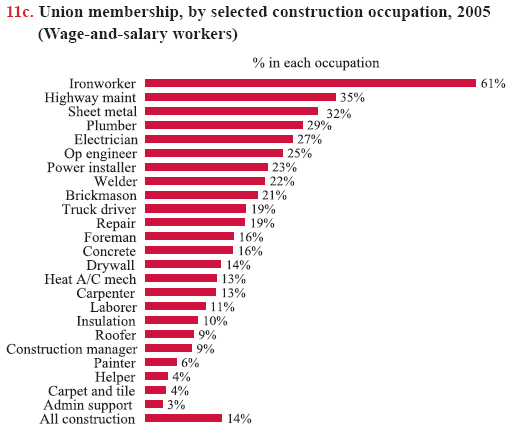 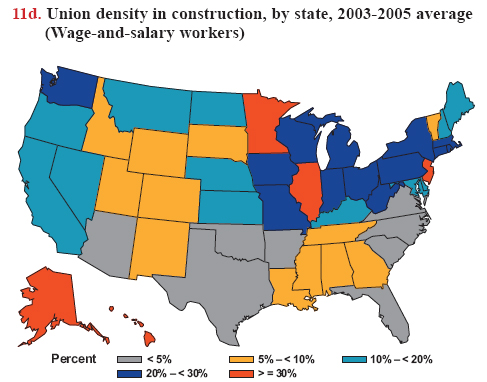 1. Production workers are all workers, except managerial and administrative support staff – and include the self-employed.

Note:
Charts 11a and 11b - Production occupations, as distinguished from managerial and support staff, are coded as 6200-9750 in the Current Population Survey (see chart book page 10). Union density is union membership plus union coverage of workers not belonging to a union.

Chart 11c - These figures do not reflect total membership in any given union, which may include more than one occupation.