Describes fatalities in roadway workzones, a case study and steps that are being taken to reduce them including a national safety awareness week and a NIOSH report discussing recommendations.
June 12, 2000


The industry always has been concerned with the problem, but contractors, contracting agencies and government policy makers finally are coming together to declare war on this carnage.

The issue now will be more visible to the public. The first annual national Highway Work Zone Safety Awareness Week was launched April 3-7 by a broad consortium of construction industry and government organizations to publicize the hazards of construction work zones. And to help get the word out on how to make work zones safer, a National Work Zone Safety Information Clearinghouse https://www.workzonesafety.org/ has been established by the Federal Highway Administration, American Road & Transportation Builders Association and Texas Transportation Institute.

Other agencies also are in motion. The National Institute for Occupational Safety and Health is about to release a long-awaited final report on work zone safety that will contain recommendations on what roadbuilders, maintainers, contracting agencies and policy makers can do to save lives.

A draft was circulated for industry comment and the final version is different in that it recognizes that "employers" cannot all be lumped together because they do not control all aspects of the work zone, says Stephanie G. Pratt, one of the three NIOSH authors of the report.

That jibes with the common industry view. "Our contractors do not control a lot of the things that a commercial contractor does," says Peter Ruane, president of the American Road and Transportation Builders Association. "We believe there is a need for a more comprehensive approach" to safety.

It is obvious to NIOSH and others that there will have to be a safety alliance to breach barriers to better performance. The contract process is a main focus. "Safety needs to be incorporated into the bid process" to put all contractors on a level playing field, says Pratt.

"We would agree with that 100%," says Bob Johnson, safety manager of the branch division of Granite Construction Co., Watsonville, Calif. "We buy top-quality equipment and a traffic control truck costs $100,000, easy. But we may be competing against a contractor putting cones out the back of a pickup truck," he says. "We would love to be spec'd in."


OSHA officials say they are awaiting the NIOSH report with great interest because the agency is launching its own assault. OSHA currently has a "local emphasis program" under way in Region 5 for enforcement of work zone safety, and that likely will be a model for a national program to start by the end of the year, says H. Berrien Zettler, deputy administrator of OSHA's Construction Industry Directorate.

OSHA is compelled to act. In 1996, Congress told federal agencies to develop five-year strategic plans for which they would be held accountable. OSHA identified two goals for construction: reducing injury and illnesses by 15% and fatalities by 15%. "We believe work zones fit" this mission, because highway construction is among the five industrial classifications with the highest fatalities, says Zettler.

The OSHA pilot program is a partnering effort and will deal with "both sides of the barrel," says Bill Grams, executive director of the Illinois Road Builders Association. OSHA was looking mainly at work zones and not autos, but we are "fusing both of these together," he says.

"OSHA has pretty much ignored highway work until now," says Scott Schneider, director of occupational safety and health for the Laborers' Health and Safety Fund of North America. "It is good that they go out and take a look."

OSHA also is about to kick off a highly unusual "direct final rule" process to adopt as a safety rule the Federal Highway Administration's current Manual on Uniform Traffic Control Devices. Instead of taking the usual four or five years, OSHA hopes to have the final rule in place by the end of the year.

MUTCD is a comprehensive document that governs the motor vehicle aspect of highway work zones. It provides overall direction for the design and setup of work zones, as well as training, personal protective equipment, speed reduction, barriers and lighting. A major revision of mutcd also is due by December, says Janet Coleman, chief of safety programs at FHWA.

OSHA thinks it can move quickly because it is not opening up mutcd for changes, but only accepting public comment on whether it should be adopted in its entirety. The highway division of the Associated General Contractors supports this move and met with OSHA May 24 to discuss the issue.

"We will put together a joint committee with OSHA" and partner on this issue, says Ted Aadland, president of F.E.Ward Constructors, Vancouver, Wash., and chairman of agc's highway division.

Contractors welcome the action because they currently can be in compliance with FHWA's MUTCD rules and still be cited by OSHA inspectors for a safety violation. OSHA rules incorporate a 1968 version of a predecessor document of the mutcd and "there are significant differences...that sometimes cause conflict," says Zettler.

After the accident, Vigue declared: "If any people are exposed to traffic, there will be a physical barrier to protect them." The barriers can be of various types, but they will be there. "We can set the example to prove to people that it is achievable without sacrificing productivity and work quality," says Vigue. "We have a responsibility to take care of our people in work zones. It has no relevance if someone is speeding...or a driver makes a mistake."

Younger drivers tend to make more mistakes and that prompted the Carolinas AGC and the North Carolina Dept. of Transportation to partner in the production last year of a driver training video, A Sudden Change of Plans, aimed at 16 and 17-year-olds. Two copies were sent to every public and private driver education teacher in North and South Carolina and thousands more have been produced for broader distribution by AGC and FHWA.

"We see the bigger problem [in work zone safety] being the traveling public," says Barry Jenkins, director of the heavy-highway division of the Carolinas AGC. "When drivers are doing two or three things at the same time with dogs, kids and cell phones, they do none well," says Jimmie Travis, NCDOT construction programs engineer.

The tape depicts a teenager listening to music, talking on a cellular phone and otherwise not paying attention as she drives through a work zone. She strikes and kills a construction worker.

"Sometimes you think that you may be stretching reality. But then something happens that makes you realize that reality is even more frightening," says Steve Gennett, executive vice president of the Carolinas AGC. As it turned out, fiction turned into reality. 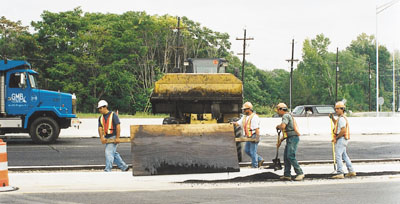 EYES PEELED Workers on foot near heavy equipment are at particular risk.

When Pete Wert first saw the video last fall when it was introduced at an AGC meeting, he says he thought it was "powerful." But the chairman of Haskell Lemon Construction Co., Oklahoma City, and past national AGC president says that two months later on Nov. 23, 1999, the "identical situation" occurred in a work zone and killed two company employees.

"We were paving in the center median of a divided highway, putting a crossover to move traffic from one side to the other," says Wert. He explains that a very young driver in a pickup truck traveling at a "very high rate of speed" became distracted and swerved across two lanes of traffic and struck the two workers standing on the median. Killed were Randy Space, 35, an asphalt lay-down supervisor, and Henry Cowger, 57, a roller operator.

Wert and other contractors say the danger is escalated with the shift to night work. "It is dangerous on its face," says Wert. "We ought to really examine our priorities" and decide whether motorist inconvenience is so bad.


How Work Zones Can be Made Safer

Fatality Statistics Are Real People Who Had Lives

"He was real excited about that job," says Ellis. On Oct. 1, 1998, Travis had been with the dot for about a week. He was working with a dot crew of about four people on the median of Highway 7 near Goldsboro, spraying flowers. The driver of a car traveling about 60 mph in the 45--mph zone looked down to either write something or talk on a cellular phone and lost control. He somehow managed to get around the parked dot trucks equipped with flashing lights and the barrels that marked the work zone and struck Travis on the median. Travis was helicoptered to a trauma center in Greenville. "His supervisor and one or two of the boys" that he had been working with came to the hospital and stayed with him and "dot made us part of the family," says Ellis. Travis died the next day.

The driver originally was charged with involuntary manslaughter, but was allowed to plead guilty to death by motor vehicle after Ellis and his wife Lois talked to the district attorney. They didn't think they could go through a trial. "I know he didn't intend to run him over," says Ellis.

Travis also liked to cook. While they were making dinner the night before the accident, Travis's mother asked him, "You do wear one of those orange vests don't you?" He replied, "Yes Mama, I do. Don't worry, I'm not going to walk out in front of any car."

Travis's parents participated in the kickoff of the first annual National Work Zone Safety Awareness Week April 3-7 in Washington, D.C. "We're trying to make the public more aware. I drive through a work zone every day and drivers don't pay any mind. They don't even slow down," says Ellis.

"I think the state dot is trying to do something" about the problem, says Ellis. "I hope it carries over to everyone. There are other Travises out there doing a job. [The accident] made me realize how dangerous it is out there. You think it can never happen to you, but it can."