After 12 workers die in 18 months in Las Vegas on Strip construction projects, 7,000 construction workers on the CityCenter and Cosmopolitan worksites walked off the job over safety concerns. The Southern Nevada Building & Construction Trades Council and Perini Building Company, the general contractor on both projects agreed that CPWR should conduct a site safety assessment. The study, which included the Fall-Safe audit tool and safety climate surveys, resulted in seventeen recommendations, most of which were implemented.
June 2009 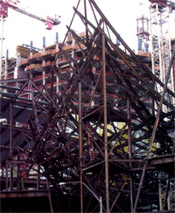 June 3, 2008, was not just another hot day on the Las Vegas Strip. After 12 workers died in 18 months on Strip construction projects – an average of one worker every six weeks – some 7,000 construction workers on the CityCenter and Cosmopolitan worksites walked off the job over safety concerns.

The Southern Nevada Building & Construction Trades Council and Perini Building Company, the general contractor on both projects, quickly sat down to talk. By the end of the day, they had forged an agreement that named CPWR – The Center for Construction Research and Training to conduct a site safety assessment of the two projects. CPWR would also coordinate OSHA 10-hour safety and health training for workers needing certification.

CPWR’s Executive Director Pete Stafford first met with the Southern Nevada Building Trades and Perini management representatives to put in place an implementation plan. In the months that followed, Perini’s top management gave CPWR and the research team assembled and led by Janie Gittleman, CPWR’s associate director of safety and health research, full access to the sites and all levels of personnel. The team of experts from the National Institute of Occupational Safety and Health and university researchers from Colorado State University, the University of Illinois, and West Virginia University got a first-hand experience of the unique sites. At $9.2 billion, CityCenter is the largest privately owned construction project in U.S. history, covering 76 acres with 18 million square feet of development and employing some 7,000-plus construction workers on round-the-clock construction.

“The sheer scale of it all is unlike any other construction project in the nation,” said Gittleman. “The trades that usually work at different times now work side by side – and overhead – which can pose scheduling and pace-of-work hazards. There’s an average of 7,200 employees in multiple crafts working 24/7. The constant movement of vehicles, materials, equipment and workers makes negotiating the site a huge safety challenge.”

The team was up to the challenge. After a site visit in June, the Worksite Assessment Team determined that its evaluation would encompass six areas: Perini’s safety orientation training program, its safety management programs, and its safety staff. The site assessment would also include a safety climate survey of Perini senior management, superintendents, foremen and craft workers to assess perceptions and attitudes about safety on the sites. Since most of the fatalities were from falls, researchers would conduct a fall hazard identification and control audit of two randomly selected buildings. Finally, they would conduct face-to-face interviews on both projects in English and Spanish.

To assess fall hazards, West Virginia University researchers used the Fall-Safe audit tool, which they developed with contractors as data collection for research and as feedback for contractors for continuous improvement. A score of 70 percent or less indicates the worksite doesn’t properly control fall hazards. Audit results of two buildings, the Aria and the Mandarin, concluded with results that were “starkly different.” Employee ladder use on the Mandarin was near perfect, and hazards identified were not as serious as those in the Aria. Mandarin had many more holes yet they were properly protected more often than the Aria. The Mandarin scored 82 percent while Aria rated just 73 percent.

Researches attended safety orientation training for new hires that provides an overview of Perini’s expectations for site safety. However, trainers sometimes undermined their own efforts in the messages they gave inadvertently. One obvious gaffe: only the opening 15 minutes of orientation training had a Spanish translator. For Spanish-speaking workers, who made up about one-third of the workforce, the message was “We don’t really care about you if you don’t know English.”

Although workers heard a number of positive messages, such as “Injuries can be prevented – rules and regulations represent accumulated lessons learned on safety and it is important to follow them,” and “Workforce diversity and mutual respect are important to Perini,” researchers noted some important messages were never delivered. For example, workers were told to report safety concerns but were never given phone numbers, office hours or names of Perini contacts.

Safety orientation efforts were sometimes skewed by the way the ideas were presented. In one session, a safety officer said others called him “Safety Hitler.” He probably thought he sounded tough on “zero tolerance” for unsafe practices, but new hires could easily assume that workers and foremen reacted negatively to his enthusiasm and were not eager to practice worksite safety.

A review of safety program management found areas for improvement. A weekly newsletter reported worksite injuries, but it went only to Perini staff, not subcontractors whose workers often suffered the injury. Perini held weekly safety meetings sent to Perini staff subcontractors but attendance was not mandatory, so many subs didn’t know about problems in a timely manner. Also, no joint labor-management safety committee existed.

Individual interviews with site personnel identified interesting and competing testimonies on jobsite safety. A foreman of a sheet metal crew described an incident where a piece of iron grating being installed by ironworkers fell into an area where his crew had been cleared to work but had not yet arrived. He said that it was just lucky that the material had fallen before they arrived as it could have seriously injured them. He believed that the pressure to get work done was responsible for this and other safety incidents. That same day, a Spanish-speaking carpenter said she didn’t have any safety concerns and that her foremen were very strict about safety compliance because they didn’t want trouble with Perini. She was “happy to be doing carpentry work” on the site.

Researchers measured the “temperature” or climate on the site to assess the perceptions and beliefs all levels of personnel held about site safety. A good safety climate could lead to improved communication, safer work practices, better morale, and increased productivity and profits by reducing direct costs of lost work days, work stoppages and work-related injuries and illness.

Workers responses were generally positive, with 70 percent approval on 32 of the 36 items surveyed. However, when responses were compared across the four groups surveyed, 16 of the 24 comparable questions (67 percent) revealed significant differences. Overall, workers’ perceptions about site safety were less positive than those of foremen, superintendents and top management.

Craig Shaw, Chairman and CEO of Perini Building Company, reviewed the reports and recommendations. In a Feb.17 release when the reports were made public, Shaw said, “While we believe Perini worksites are among the safest in the world, we continuously seek to identify methods by which we can adjust and strengthen worker safety, and to that end, we are already implementing many of the CPWR’s recommendations.”

According to Steve Ross, Southern Nevada Building Trades Executive Secretary-Treasurer, the Perini Building Company has implemented a plan to respond. A few of these measures include, but are not limited to:

Establishment of a toll-free telephone number to accept work-related reports, questions, or concerns that individuals wish to communicate in confidence.

Greater emphasis on recognizing workers engaged in safe work practices, to include:

Perini Building Company has also instituted mandatory OSHA-10 training for all workers on the CityCenter and Cosmopolitan job sites. CPWR coordinated all site training and ensured appropriate delivery of the OSHA training from June through the end of 2008. Perini, CPWR and members of the Building Trades taught the OSHA 10-hour classes to more than 10,000 workers in less than six months. Perini began total management of the OSHA-10 training in January 2009. Their goal is to train all of the approximately 11,000 workers currently employed at both projects by midyear.

CPWR’s Stafford expressed gratitude to the researchers who participated in the site safety assessment and to Perini staff and management. “Perini demonstrated its desire for strengthening its current worker safety programs by giving our research staff and visiting professionals unfettered access,” Stafford said. “We’re glad we could make a contribution to improve the safety and health of workers on this most challenging jobsite.”