A U. Mass., Lowell professor discusses overhead drilling in the ‘big dig’ and its attendant ergonomic and airborne silica inhalation hazards.

The most expensive highway construction project in the world, the Central Artery/Tunnel (CA/T) in Boston, Massachusetts, is scheduled for completion in 2005. Known as the Big Dig, the project includes a new tunnel under the harbor connecting Logan airport and interstate I-90, the Mass. Turnpike. The first section of the tunnel, finished in 1995, is named for Boston baseball hero Ted Williams.

Researchers from the Construction Occupational Health Program at the University of Massachusetts Lowell have been conducting occupational health studies on the Big Dig since 1992 under a mandate to improve health conditions for workers in the regional construction industry. The research is part of a nationwide consortium headed by CPWR – Center for Construction Research and Training, the research, development, and training arm of the Building and Construction Trades Department, AFL-CIO, and funded by the National Institute for Occupational Safety and Health, part of the CDC.

Full-time staff researchers and student research assistants have spent countless hours on site observing, interacting with workers and dozens of contractors, and seeking ways to reduce musculoskeletal injuries and exposures to silica. The seven miles of tunnel that make up the project are constructed mainly of concrete. Concrete is mostly made of sand and sand is silica. Drilling, chipping, cutting, or otherwise abrading concrete produces dust containing airborne crystalline silica. When inhaled, this can cause silicosis, a deadly lung disease. While the dangers of silica have been known since ancient times, the COHP's research has shown that workers doing concrete construction are exposed to a much higher level of silica than was known in the past. To prevent silica exposure and future cases of silicosis, contractors need to plan ahead and provide proper protection to workers.

We first learned of this problem while watching the construction of the Ted Williams Tunnel. We found workers on a scissor lift drilling approximately 17,000 holes in the concrete roof of the tunnel. We were told that hangers would be epoxied into the holes to support the suspended ceiling ventilation system. The workers doing the drilling were exposed to a mix of hazards including silica dust and potential shoulder, neck, and back injuries from using a heavy tool to drill overhead for hours at a time. It was a very high hazard job.

We also noticed that the workers had added their own accessories, or "Bright Ideas,"1 to make the job less hazardous. They had gone to the hardware store and bought a household fan that they duct-taped to the railing of the scissor lift to blow away the concrete dust that was, as we now know, almost pure silica. They had also fashioned a pole to hold up the drill and protect their shoulders and backs from injury. We were told that this type of support is sometimes called a "soldier pole" or an "inverse drill press."

This tunnel consisted of 13 pre-fabricated tube tunnel sections. Each section had been lined with concrete before being sunk and connected on the harbor floor. We asked why the holes had to be drilled after the concrete liner had been constructed and why the holes were not designed into the lining in the earlier formwork stage. Typical answers were that it had to be done this way and that no one had really thought about the problem in the design phase. Engineers on site told us that they had not been able to plan for the holes because they did not know where they would be needed until they began installation of the ceiling ventilation system.

At the meeting, the engineers said that we were not the only ones who had raised questions about the design and that future designs had been changed for reasons of health and safety, cost, and constructibility [ease of construction]. As is often the case, the difficult and dangerous design had also been very expensive. The new design eliminated the problem of drilling holes for hangers by imbedding the supports for the ceiling ventilation system in the tunnel roof during the concrete formwork stage of construction. The first tunnel using the revised ceiling ventilation design, the I-90 Fort Point Channel tunnel, has been completed. According to Charlie Rountree, safety and health manager for CA/T Managing Consultant Bechtel/Parsons Brinckerhoff, the Ted Williams Tunnel ceiling ventilation system cost about $55/sq. ft. The redesigned ceiling ventilation system cost about $22/sq. ft. for a savings of approximately $33/sq. ft. in total installed cost. Two additional tunnels under construction are expected to result in similar savings.

Unfortunately, it is not possible to count the savings from injuries that did not happen. However, as Rountree said, "We should always consider safety and health, constructibility, and cost, in that order." There is no doubt that redesigning the tunnel ceiling ventilation system prevented some workers from getting career-altering musculoskeletal injuries and life-threatening silicosis.

1 The COHP has published a series of "Bright Ideas," construction workers' health and safety innovations on the job. They can be viewed on our website at www.uml.edu/Dept/WE/COHP. 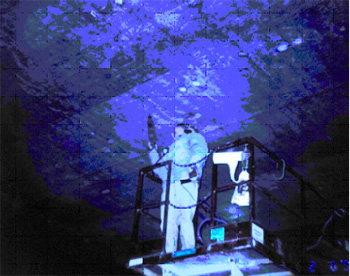 Worker drills overhead one of 17,000 holes in tunnel roof for hangers for suspended ceiling. The household fan added to blow way silica dust is taped to the corner of the lift. 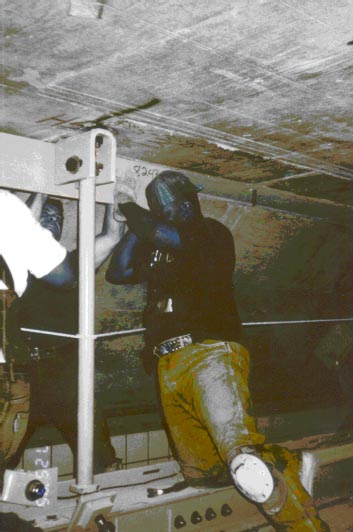