Many construction companies currently in operation are relatively new businesses, particularly those owned by Hispanics. In 2002, more than 28% of construction owners reported that their companies were established, purchased, or acquired within the past three years compared with 44% for Hispanic owners (chart 8a).1 The corresponding proportion was even higher for Hispanic companies without employees (nonemployer*). These statistics were provided by the 2002 Survey of Business Owners (SBO) which collects statistics on sources of financing for expansion, capital improvements, or start-up; types of customers and workers; and other information on business characteristics (see chart book page 7).

Based on the SBO, in 2002, nearly 57% of construction company owners reported that they started their business with personal savings (chart 8b). Some obtained loans from banks or government sources and others used credit cards. Only a small percentage used funding from outside investors. Notably, about 28% of companies reported that they did not need any capital to start a business in construction (chart 8b). Companies without employees on payroll (nonemployers) were less likely to need capital to start than companies with employees. Among nonemployer construction companies, 40% of Hispanic owners reported that they started their businesses without any capital sources, higher than 34% for companies with owners from other ethnic backgrounds.

Independent contractors or self-employed workers are also known as sole proprietors; they are sole owners of their own business and they pay taxes as personal income. Although most construction companies are sole proprietorships (see chart book page 3), the majority of construction business receipts are from companies that file corporate income taxes (chart 8e). Construction firms also are held as partnerships and S corporations. S corporations* are closely held businesses with no more than 75 shareholders (family members are counted as one) according to the definition by the Internal Revenue Service. S corporations file federal income tax returns, but they are not taxed directly. Instead, they pass net income to their shareholders, who then pay income taxes. Partnerships – like S corporations – file annual information returns identifying allocations and distributions. Each partner then files his or her allocated profits along with personal income tax returns.

The categories and data used on this page are not directly comparable to other pages and previous editions of this chart book due to different data sources and changes in industrial coding systems. 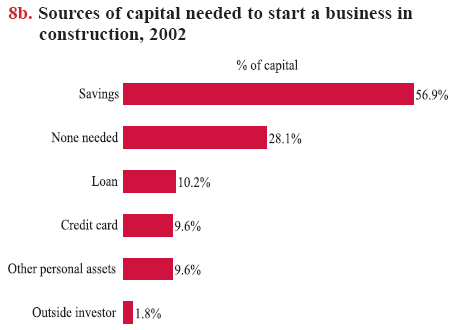 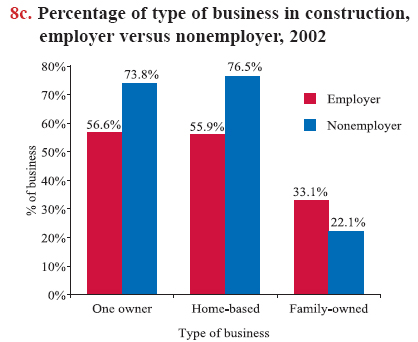 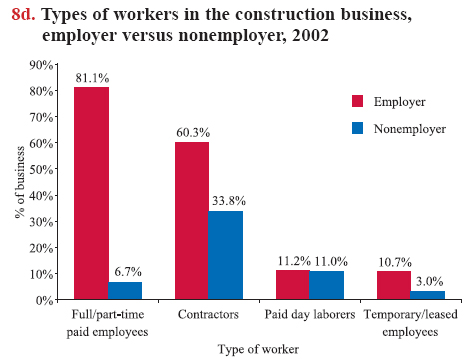 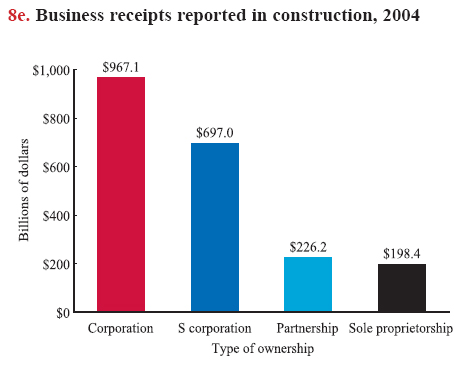 1. Companies or firms not responding to the Survey of Business Owners (SBO) questions were excluded from the percentages reported in the text.