Section 6: The Value and Units of Residential Construction

Along with the expansion of the value of residential construction, new single-family housing starts climbed from 892,000 in 1975 to 1.72 million in 2005 (chart 6b). The figures for building permits and starts are collected from different surveys. Changes to the status of buildings often take place after the permit has been issued, causing differences between the number of permits and the number of starts/completions.

Another Census Bureau series, Expenditures for Residential Improvements and Repairs, provides estimates of spending by property owners for maintenance, repairs, additions, alterations, and major replacements to residential properties (including, for instance, a guest house or landscaping) during the current quarter and for specified preceding quarters, with some comparative data for earlier years in the United States and its regions. The series, which is more inclusive than the Construction Spending, includes maintenance and repairs for public housing.

In 2005, about $215 billion was spent on owner-occupied and rental units, combined, for maintenance, repairs, additions, and alterations (or $166.3 billion and $48.7 billion, respectively, in 2005 dollars, chart 6c). Maintenance, repairs, additions, and alterations estimates are based on data collected from homeowner interviews for the U.S. Bureau of Labor Statistics (BLS) Consumer Expenditure Survey and rental unit owners, who are contacted by mail or telephone by the Census Bureau each quarter. 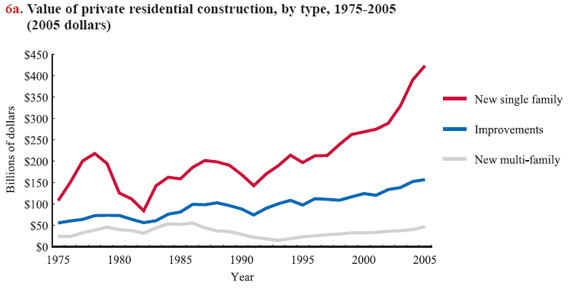 Source:
Charts 6a, 6b, and 6c - The State of the Nation's Housing 2006, Joint Center for Housing Studies of Harvard University, Table A-2.