Section 5: The Value of Private- and Public-Sector Construction

The differences in the values reported for construction result from differing survey and estimation methods. The major difference is that Construction Spending measures the value of construction currently being installed or erected, whereas the Economic Census measures and provides information on the receipts, expenditures, and characteristics of establishments performing the construction work.1 The Economic Census uses receipts for construction work done by establishments in the construction industry. By contrast, Construction Spending includes work done by projects in any industry, and is based on ownership, which may be public or private. This series also covers new construction and major replacements, such as the complete replacement of a roof or heating system. If a construction project extends before or after the time covered, the project's value is adjusted, based on input from the owner.

Construction Spending includes costs of (1) materials installed or erected, (2) labor, (3) construction rental equipment, (4) the contractor's profit, (5) architectural and engineering work, (6) miscellaneous overhead and office costs chargeable to the project on the owner's books, and (7) interest and taxes paid during construction (except state and locally owned projects).

Costs such as the complete replacement of a roof or heating system are included, but not the costs of production machinery, such as heavy industrial machinery, printing presses, stamping machines, bottling machines, and display cases and shelving in stores. Also not included are the costs of drilling gas and oil wells, including the construction of offshore drilling platforms and the digging and shoring of mines. Although additions and renovations are counted, maintenance and repairs to existing structures or service facilities are not. While modular homes are included, mobile homes are not.

In the public-sector, construction of educational facilities accounted for the largest share of dollar value, 28.6%, at $66.9 billion in 2005 (chart 5d). Highway and street construction was close behind at $63.8 billion, encompassing 27.2% of public construction. "Other" public construction includes commercial, conservation and development, lodging, religious, communication, and manufacturing. 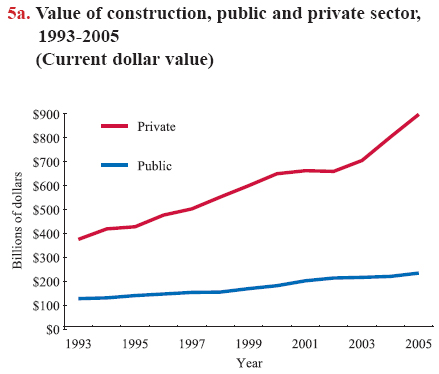 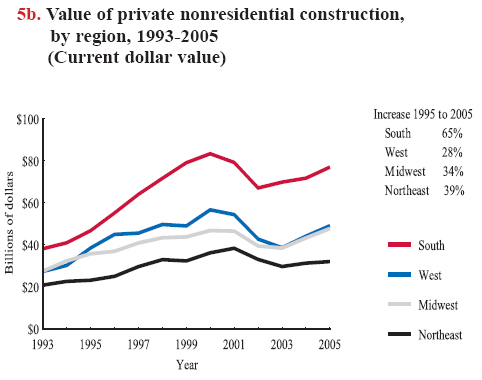 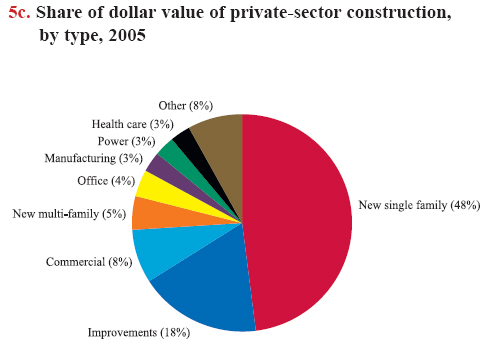 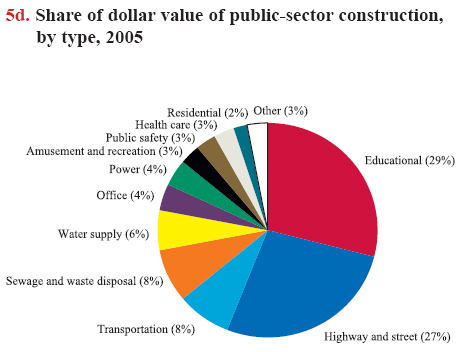 2. Figures on this page are in current dollars.