Section 49: Workers’ Compensation in Construction and Other Industries

Workers' compensation programs vary among the states. With no nationwide standard, documenting spending, benefits, and other features of workers' compensation is difficult. However, the available data show that the costs associated with work-related injuries and illnesses make the construction industry one of the most expensive of all U.S. industries.

Workers' compensation insurance rates in construction vary widely among jurisdictions as well as occupations. In 2006, the workers' compensation insurance rate per $100 of payroll for roofing (all kinds) was $64.88 in Montana and $12.00 in Indiana, while the rate for insulation work was $25.92 and $5.64 in the two states, respectively (chart 49b). These data published by the magazine ENR (Engineering News Record) are compiled from state rate manuals.

In attempts to control costs, the workers' compensation system has been revised and reformed repeatedly. Over the past two decades such changes have resulted in tightened fee schedules, limits on physician choice, eligibility restrictions, and lowered benefits.2 In some states, workers whose disability resulted from hazardous workplace exposures are required to prove that the workplace was the primary source of the disability. Pursuing such claims places a costly burden on workers, forcing them to spend money and time on health care and legal consultations with uncertain prospects for reimbursement. Requiring such proof may discourage workers from pursuing these claims at all, ultimately reducing the number of workers who qualify for workers' compensation benefits.

In other cost-cutting efforts, some states have "carved out" alternative programs as another choice in providing workers' compensation insurance. With this approach, management and labor can create a more efficient, non-adversarial climate for handling workers' compensation cases and claims administration. The program uses an agreed-upon list of health care providers, a labor-management safety committee, a light-duty/modified-job return-to-work program, and a separate dispute resolution system. Ten states have either passed laws or revised regulations to allow contractors signatory to collective bargaining agreements to enter into a negotiated workers' compensation program with the union.3 Fifteen states have permissive, partial or total allowances for the creation of these programs, but these states do not have laws or regulations specific to a program.4 For example, Rhode Island's labor code reads that "[a]ny employer may enter into an agreement with his or her employees" and that the program must have the approval of the director and the chief judge of the workers' compensation court. Legislators in the 35 remaining states have varying degrees of interest in carve-out programs. 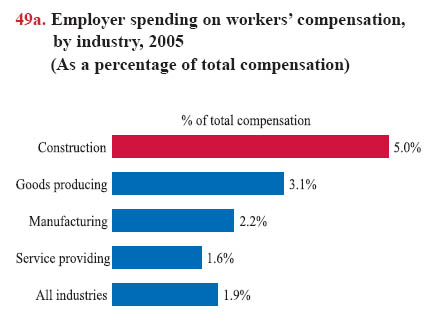 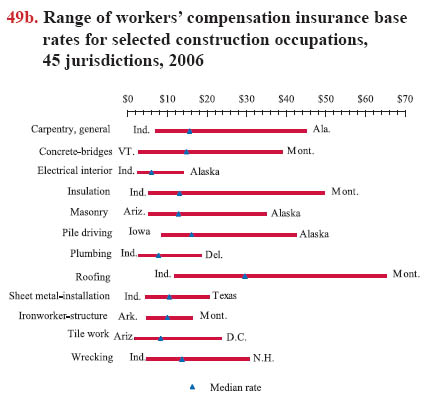 Note:
Chart 49a - Data cover the private sector only. Employer costs are workers' compensation premiums for firms that buy insurance or, for self insured employers, administrative expenses plus payments to workers, their survivors, and health care providers.

Chart 49b - Rates per $100 of payroll, were in effect September 9, 2006. Listings do not include Maine and Nevada. The median is the midpoint: half the jurisdictions in the survey charge more and half charge less. For instance, for plumbing, the rate of $6.26 in Mississippi is the median. (The listing does not include all categories for the 45 jurisdictions.)