Section 48: Costs of Work-Related Injuries and Illnesses in Construction

Work-related injuries and illnesses mean losses not only to workers, but also to their families, employers, and society. Calculating an accurate estimate of these costs is difficult for many reasons. Some costs, such as wage replacement and medical payments, can be measured directly, but others, such as a family's pain and suffering, are almost impossible to quantify. Many costs are not compensated, partly because they are difficult to link to specific work exposures. Construction workers may move among several employers in a year or even dozens of employers in a career. Work-related musculoskeletal disorders, which can be extremely costly in expense and suffering, often develop through repetition over months or years. Similarly, work-related illnesses, such as cancers or nervous system diseases, may not appear for many years after exposures to asbestos, solvents, or other toxins in the workplace. Therefore, the estimates reported here are only a rough measure and may differ from estimates in other publications due to different measurements.

The total cost of fatal and nonfatal injuries in the construction industry is estimated at nearly $13 billion1 annually. Deaths are estimated to be 40% of the total, and nonfatal injuries and illnesses, mainly injuries with days away from work,2 represent 60% of the total cost. On average, the death of a construction worker results in losses valued at $4 million, while a nonfatal injury involving days away from work costs approximately $42,000. These estimates include direct costs (such as payments for hospitals, physicians, medicines), indirect costs (wage losses and household production losses, costs of administering workers' compensation), and quality-of-life costs (value attributed to the pain and suffering that victims and their families experience as a result of injuries or illnesses).

Five construction industries accounted for over half the total fatal and nonfatal injury costs: miscellaneous special trade contractors; plumbing, heating, and air-conditioning; electrical work; heavy construction except highway; and residential building construction. Each industry had $1.2 billion in costs or more (chart 48a).3 When examining only nonfatal injuries, four of those five industries were ranked highest in estimated costs: plumbing, heating, and air-conditioning; residential building

When analysis was restricted to expenditures on medical services, construction injuries cost about $1.36 billion annually. 4 The services for inpatients accounted for nearly one-third of the total medical costs, at $444 million per year (chart 48c). The estimates of medical costs are based on a large national population survey – the Medical Expenditure Panel Survey (MEPS), a unique data source providing information on health services and expenditures for various health conditions. 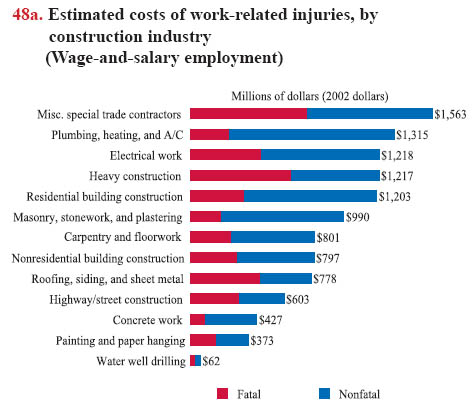 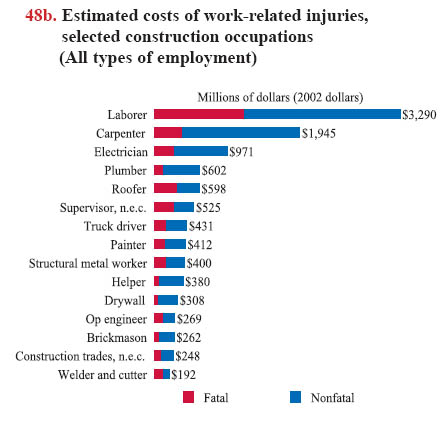 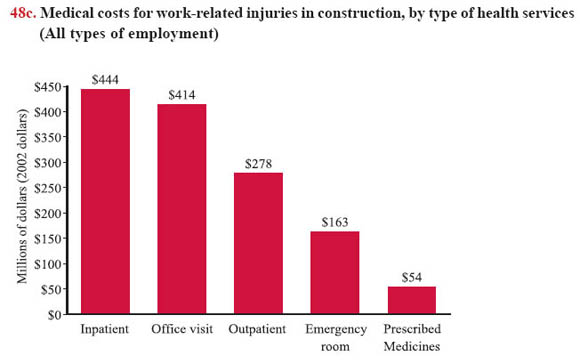 Note:
Chart 48a - The numbers are reported by the 1987 Standard Industrial Classification (SIC) system.

Chart 48b - For Supervisors and Construction trades, "n.e.c." stands for "not elsewhere classified."