Construction workers can be exposed to the hazards of heavy metals – manganese and chromium – when they are welding or even working near someone who is welding. Pipefitters, ironworkers, boilermakers, and sheet metal workers routinely perform welding and associated processes such as arc-cutting. Other trades occasionally weld and perform thermal cutting of metals. This work often occurs in tanks or boilers or in other poorly ventilated settings. The fumes generated during welding contain fine particles that are part of the base metal, the electrodes, fluxes, and the filler rods. These particles can deposit in the lungs and be distributed throughout the body or get carried home as dust on clothes and work boots. Estimates of the number of workers exposed to welding fumes range from 410,000 full-time welders to over one million workers who weld intermittently.1

Some health effects from welding show up quickly. Metal fume fever, eye and throat irritation, and lead poisoning are conditions that may develop after relatively brief but high exposures. Lung disease, cancer, or nervous system disorders caused by welding may take many years to develop. The International Agency for Research on Cancer has concluded that welding fumes may cause cancer – and welders of stainless steel have higher rates of lung cancer than workers who weld using other metals.2

Manganese, a known neurotoxin, is a component of nearly all steels and many welding rods and wires. Excessive exposure to manganese in other industries, such as manganese mining and smelting, causes symptoms closely resembling Parkinson's disease. Recent studies of welders suggest the manganese in welding fumes can also cause this disease, but there is still debate on the amount of risk to welders in the construction industry.1 Results of an industrial hygiene sampling of construction welders present the probability of a boilermaker, ironworker, or pipefitter exceeding the American Conference of Governmental Industrial Hygienists threshold limit values (ACGIH TLV) for total respiratory particulate and manganese in welding during an 8-hour period (chart 45a). These three trades are likely to have the highest exposures to both welding fumes and to manganese based on the tasks that they perform.

Another hazardous metal, chromium, is present in several construction tasks. Metal fume exposure from stainless steel welding is of particular concern because it contains chromium and nickel, both of which are known to cause lung cancer in workers. The heat from welding changes the chromium in stainless steel and releases it into the air in another form – hexavalent chromium, also known as chrome 6 or hex-chrome, which is a known carcinogen. The Occupational Safety and Health Administration (OSHA) estimates almost 200,000 construction workers are exposed to airborne hex-chrome, and that a substantial proportion of these workers are exposed above the current OSHA permissible exposure limits or PEL (chart 45b). The current OSHA PEL of 5 micrograms per cubic meter of air (5 µg/m3) still leaves exposed workers with a significant risk of lung cancer. The National Institute for Occupational Safety and Health (NIOSH) recommends a lower exposure level of 1 µg/m3.

Hex-chrome is also present in cement and is a leading cause of the skin disease, allergic contact dermatitis (ACD).3 ACD may continue even without further exposures to the substance. 4 Irritant contact dermatitis (ICD), which can be acute or chronic, is caused by wet cement's alkaline and abrasive properties. ICD can also be caused by solvents, soaps, asphalt, dust, fiberglass, and abrasives. Although many workers are exposed to cement, construction workers in the masonry trades are primarily affected.

Skin disorders from hex-chrome affect workers in this nation and abroad. Although the rate of cement workers' ACD from hex-chrome has not been studied in the United States, the U.S. Bureau of Labor Statistics (BLS) reported in 2005 that skin diseases or disorders accounted for 27% of the total occupational illnesses among construction workers.5 An analysis of 10 years of workers’ compensation claims found that a construction worker with dermatitis has an average of 32 days off work per claim.6 Experts have estimated that the actual number of occupational skin disorders is 10 to 50 times higher than the number BLS reported.7 High ACD rates in Europe led to legislation in several countries requiring the addition of ferrous sulfate to cement. This additive converts hexavalent chromium to a less allergenic form, trivalent chromium. In Finland, the rate of reported (and medically confirmed) cases of ACD declined by two-thirds a decade after the legislation was enacted.8 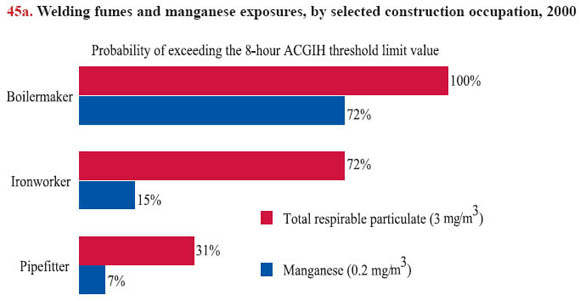 Note:
Chart 45a - ACGIH is the American Conference of Government Industrial Hygienists, the organization that sets a threshold limit value (TLV) to welding fumes and manganese exposure.

Chart 45b - Hexavalent chromium is measured in micrograms per cubic meter of air (µg/m3). The OSHA standard is 5 micrograms/ m3 time-weighted average (TWA).