Section 44: Lead in the Construction Industry

Construction workers are exposed to lead on the job, which has been associated with anemia, hypertension, infertility, miscarriages, and damage to the nervous system or kidneys, depending on the duration and the exposure level. Exposures come mainly from tasks that generate fumes and respirable dusts, which put a wide range of workers in jeopardy. The risk of exposure appears most acute for those workers engaged in building finishing, highway, street and bridge repair, and utilities.

The federal government banned the use of lead-based paint in residential construction in 1978. However, no such federal ban exists in commercial construction, including bridges and steel superstructures, such as water towers.

In 1993, the Occupational Safety and Health Administration (OSHA) established a regulation that requires employers to monitor blood lead levels (or BLLs) of construction workers exposed to lead on the job. OSHA's Lead in Construction standard specifies medical monitoring of workers (including a baseline blood lead test) and the removal and medical monitoring of workers who have BLLs above 50 micrograms per deciliter (µg/dL). Workers must not return to work exposing them to lead until their BLLs are below 40 µg/dL.1,2 While once thought to be protective, this standard is based on medical information that is now more than 30 years old, and recent research suggests that these levels are not protective against the adverse health effects of lead.3 Lower medical removal recommendations have been proposed to protect workers against the adverse health effects of both acute and cumulative lead exposures.3,4

Also, in the early 1990s, the National Institute for Occupational Safety and Health (NIOSH) established the Adult Blood Lead Epidemiology and Surveillance (ABLES) program to support state-based efforts to collect work-related BLLs in U.S. adults (aged 16 years and older). The ABLES surveillance case definition includes a BLL at or above 25 µg/dL. These data are analyzed by state health departments and departments of labor for targeting public health intervention activities and by NIOSH to detect patterns and trends nationwide.5,6

A total of 6,676 workers in 2003 and 6,036 workers in 2004 with BLLs at or above 25 µg/dL were identified by 32 states reporting industry codes to the ABLES program.7 The construction industry, as classified by the North American Industry Classification System (NAICS) code 23, accounted for 17% of the total (chart 44a), which is disproportionately high given that construction employment accounts for about 7% of the total workforce.

The rates of elevated BLLs among construction workers vary among states. Maine, Massachusetts, New York, and New Jersey had higher rates of elevated BLLs (at or above 25 µg/dL) than other states (chart 44b). There are many reasons for higher rates in these states. Long-standing and active surveillance programs identify cases, conduct follow-up activities and encourage better reporting by physicians and laboratories. The proportion of aging infrastructure and housing stock in these states is another possible cause. Homes and bridges built before 1978 have been identified as high risk for containing lead-based paint, which is removed by construction workers during painting, renovation, or deleading. Finally, in some states such as New Jersey, contract specifications for work on steel structures require BLL testing.

The rates of construction workers with elevated blood lead levels also vary by activity. Building finishing; highway, street, and bridge work; and utilities were among the top five industries with the largest number of reported cases above 25 and 40 µg/dL between 2003 and 2004 (chart 44c).

Reducing blood lead levels has been a national priority for the past two decades. The Department of Health and Human Services developed a national public health objective within Healthy People 2010 to reduce the prevalence of BLLs above 25 µg/dL among employed adults to zero.8 The large number of construction workers with elevated BLLs indicates the need for continued efforts to identify, classify, and target prevention efforts towards construction workers engaged in high-risk occupations and construction activities. 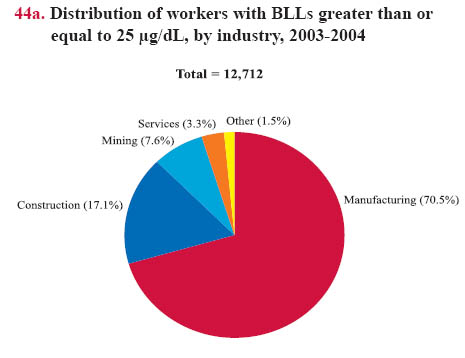 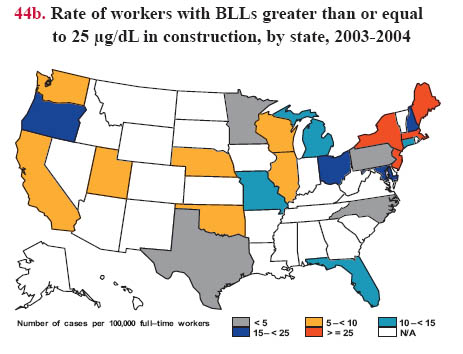 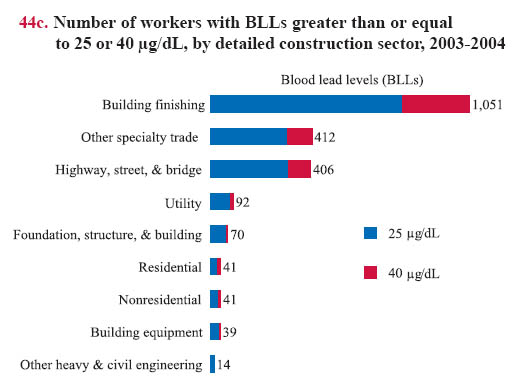 Note:
Charts 44a, 44b, and 44c - The term BLL refers to blood lead levels, and they are measured in micrograms per deciliter (µg/dL). Data set inclusion criteria: 1) Persons aged 16 years and older; 2) BLL > 25 µg/dL and BLL > 40 µg/dL; 3) Industry 2002 NAICS code 23 (Construction); 4) Individuals with residence in the reporting state; 5) Only data for years 2003-2004 were included for both, by-state and by-industry analysis. Reporting states removed personal identifiers and assigned a unique identifier for each individual. For each individual, only the highest blood-lead level for that year was included. For purposes of this analysis, deleaders were not excluded from the data set. To date, there is no precise cross-walk between SIC and NAICS for deleaders. Two (2) cases were coded by states with 1987 SIC = 1799 (special trade contractors and with 2002 NAICS 212231 (lead ore and zinc ore mining). These cases were not included in the data set. From this data set, two data subsets were generated: 1) A by-state data set was generated, regardless of the number of cases in individual 2002 four-digit NAICS codes, including all states reporting a total of five or more cases for 2003-2004. 2) A different by-industry data set was generated, regardless of the number of cases reported by the state, based on 2002 four-digit NAICS codes. Industries with five or more cases were included in the data set. 3) Note that both by-state and byindustry data totals are different. This is due to differences in generating data sets and due to exclusion of states and industries with fewer than five cases per cell.

Chart 44b - Data not available (N/A) for states represented as blank or white due to 1) state may not be part of the ABLES reporting system, or 2) fewer than five cases were identified, or 3) employers may not be in compliance with the regulation. Denominators for state rates were calculated using the 2003 and 2004 Current Population Survey.

Source:
All charts - Data reported by state ABLES programs. Of the 32 reporting states, 27 contributed data for chart 44b. Data generated and analyzed by Robert Roscoe and Walter Alarcon. Data analysis and interpretation by Janie Gittleman and CPWR Data Center.