Construction work has long been known to be hazardous to workers' lungs. Tasks such as abrasive blasting, emptying bags of cement, cutting wood and masonry, painting, gluing, cleaning with solvents, welding, and using diesel-powered heavy equipment all generate lung hazards.

Asbestos and silica are well-recognized hazards in construction. Silicosis is caused by exposure to crystalline silica, which is abundant in rock, sand, and many other construction materials. According to data from the National Occupational Respiratory Mortality System, there were 702 deaths from asbestosis and 118 deaths from silicosis in construction from 1990 through 1999.1 The number of deaths from silicosis is believed to be declining, but the National Institute for Occupational Safety and Health (NIOSH) has said silicosis deaths are under-diagnosed and underreported. Increased use of power hand tools such as concrete saws and grinders, and environmental containment of dusty operations like abrasive blasting, may result in increased exposures to silica in some trades.

Symptoms of diseases caused by workplace hazards may not appear for years or decades after the exposure. As a result, cases of occupational diseases such as silicosis, asbestosis, mesothelioma, or lung cancers are rarely captured and documented as "work-related" in the U.S. Bureau of Labor Statistics' (BLS) system. In 2005, the BLS reported a total of 1,100 nonfatal work-related "respiratory conditions" among the nation's 7.2 million wage-and-salary construction workers in the private sector. 2 This figure is believed to be underestimated. For comparison, the National Center for Health Statistics (NCHS) reported that in 2000 alone, approximately 20,000 people (including construction workers) who were in the hospital had a diagnosis of asbestosis. NCHS data are based on hospital discharges while BLS data are based on employer reports.

Several statistical studies and large-scale medical screenings do suggest that construction workers suffer from occupational lung diseases. Using the NCHS National Death Index, studies compared the recorded deaths in a given construction occupation, such as bricklayers, with the number that would have been expected for the general U.S. population. The data for 1990-1999 shows that members of some construction trades, who have known exposures to hazardous substances including carcinogens such as asbestos and silica, have much higher risks of death from asbestosis, mesothelioma, and lung cancers than the general population (chart 43a).

Occupational exposures to certain dusts, such as silica, increase the risk of developing chronic obstructive pulmonary diseases (COPD), including chronic bronchitis and emphysema. About 13% of white construction workers, 30 years and older, had COPD according to data from the Third National Health and Nutrition Examination Survey for 1988-1994.3 COPD prevalence in the general population has been estimated at between 4% and 10%.4

From 1996 to 2006, over 10,000 pulmonary (lung) function tests and chest X-rays were given to current and former construction workers at Department of Energy nuclear weapons facilities. The percentage of workers with chest X-ray findings of asbestosis or silicosis ranged from 11.7% to 38.8%, depending on the trade (chart 43b), and more than 40% had abnormal pulmonary function tests (PFTs). The prevalence of abnormal chest X-rays or PFTs increased with age and years worked. For workers over age 65, 27% had an abnormal chest X-ray and 55% had abnormal PFTs.

The best way to protect workers from lung hazards is to prevent the substances from being released into the air, through controls such as ventilation and dust suppression. When such methods are not feasible, employers can provide workers with respiratory protection that must comply with the requirements of the OSHA respiratory protection standard.5 Data from the Survey of Respirator Use and Practices6 conducted by the BLS and NIOSH show that in 2001 nearly 10% of construction workers used respirators as an employer requirement during a 12- month period (chart 43c). Only one-half (50.1%) of the construction establishments that required respirators provided workers with OSHA-mandated training in the proper use of respirators. Respirators were most commonly used for protection against paint vapors (44.7%), solvents (27.8%), and silica dust (24.1%) in construction establishments (chart 43d). Of those employers requiring respirator use, 77.8% relied upon a disposable dust mask some or all of the time; 40.5% required use of a non-disposable half-face respirator for some tasks. 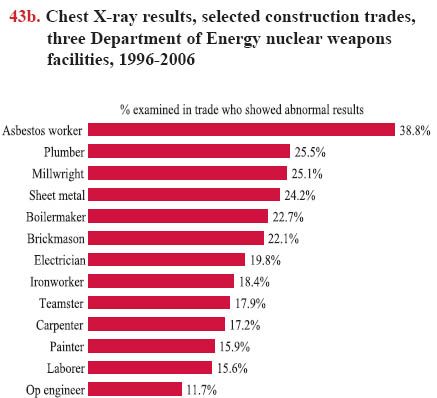 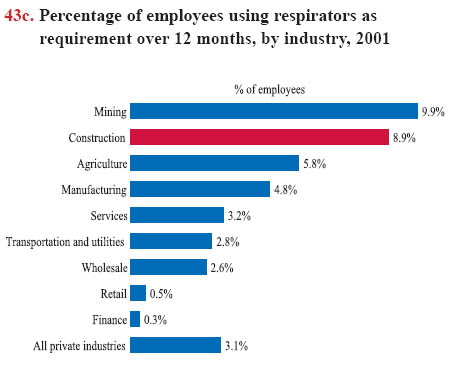 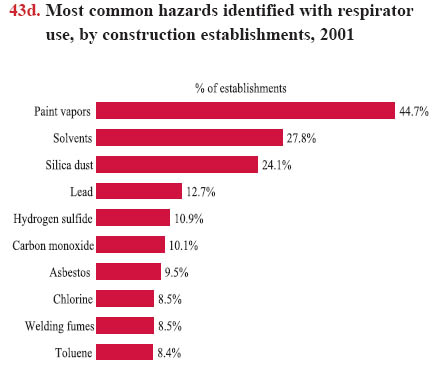 6. U.S. Bureau of Labor Statistics, National Institute for Occupational Safety and Health. September 2003. Respirator Usage in Private Sector Firms, 2001. This survey was conducted from August 2001 through January 2002, collecting data on respirator usage during the 12-month period prior to the survey. The 40,002 establishments (employers) were selected from the sample used for the 1999 BLS Survey of Occupational Injuries and Illnesses (SOII). Thus, self-employed and farms with fewer than 11 employees were excluded from this survey, http://www.cdc.gov/niosh/docs/respsurv/pdfs/respsurv2001.pdf (Accessed November 2007).

Note: Chart 43a - Proportionate mortality ratio (PMR) of 1.0 means the group has the same risk of death from a given cause as the general U.S. population (matched statistically for age, race, and sex); 1.25 means a 25% higher risk of death than the general population from the listed cause.

Chart 43d - In 2001, 9.6% (or 64,200) of construction establishments (employers) required respirator use. Percentages in chart refer to these establishments.