Every year, thousands of construction workers suffer hearing loss from excessive noise exposure on the job. Hearing loss impairs quality of life on and off the job, but it can also increase the risk of injuries – for instance, when a worker cannot hear approaching vehicles or warning signals. Noise-induced hearing loss usually results from extended exposure to sound levels greater than 85 decibels A-weighted, or dBA (the A-weighting discounts certain sound frequencies to simulate human hearing). Hearing loss begins at higher frequencies (4,000 Hertz and above) and thus first affects the ability to hear high-pitched sounds, such as women's and children's voices (especially on the telephone). With continued exposure, the high-frequency hearing losses become more severe and losses occur in the normal-speech range (3,000 Hertz and below). Noise-induced hearing loss is often accompanied by tinnitus (ringing in the ears).

Workers' compensation data from British Columbia, in Canada, show that the risk of hearing loss among construction workers increases with length of time on the job (chart 42a). After 16 to 25 years on the job, on average, a construction laborer has the hearing ability of someone about 20 years older that has not been exposed to high noise levels at work. The British Columbia study found that equipment operators, carpenters, truck drivers, electricians, and welders also had considerable hearing losses.

In the United States, the U.S. Occupational Safety and Health Administration (OSHA) requirements for comprehensive hearing conservation programs do not apply to construction. There has been little information available on hearing loss among construction workers in the United States. The highly mobile and transient nature of the construction workforce makes it a challenge to track changes in workers' hearing over long periods of time.

More than 10,000 construction workers formerly employed by the U.S. Department of Energy (DOE) participated in a medical screening program between 1997 and 2007. The participants were, on average, about 58 years old and had worked in construction for 23 years. Of those examined, 58.3% had significant abnormal hearing loss due to noise exposure at work, based on the 1998 NIOSH criteria of a significant threshold shift (hearing loss) of 15 decibels at 1,000, 2,000, 3,000, 4,000, 5,000, or 6,000 Hertz in either ear.1 Although the amount of hearing loss varied somewhat by occupation (chart 42b), hearing loss was found in more than 50% of workers in all construction trades except asbestos work. The percentage of workers with hearing loss increased greatly with age, but even 17% of construction workers under age 45 had evidence of hearing loss; the proportion of workers with hearing loss increased to 65% in those 55- 65 years old, and to 89% in those over age 65.

The University of Washington has studied hearing loss, noise exposure, and the use of hearing protection devices (HPD) among construction workers in Washington state. In one study, the researchers found that, among all occupations, construction workers had one of the highest workers' compensation claim rates for noise-induced hearing loss.2 They also found that workers in many crafts are exposed to noise levels of 85 dBA and higher for long periods of time of the work shift. The OSHA permissible noise exposure limit is 90 dBA as a full-shift time-weighted average, and most experts agree that hearing loss occurs with sustained exposure at or above 85 dBA. Operating engineers, on average, were exposed to noise levels greater than 85 dBA for 49% of their work shifts (chart 42c), and to noise over 90 dBA for 25% of the shift. The researchers found that, on average, construction workers used hearing protection only 17% of the time when exposed to workplace noise over 90 dBA.3

The workers' compensation board of British Columbia has developed a model workplace hearing conservation program. Since the program began in 1987, there has been a steady increase in the use of HPDs, with almost 90% of construction workers reporting regular use in 2000. Between 1993 and 2002, the percentage of construction workers with a hearing loss decreased in workers over age 40 (chart 42d). Over that same period, the compensation cost for an average permanent hearing loss claim declined by 37%, suggesting a decline in the severity of the hearing loss, and the number of claims declined by 31%. British Columbia has a long-standing positive safety culture, a high percentage of hearing protection use among workers, and a centralized record-keeping system. Such a centralized system can serve as a model for how to maintain a hearing conservation program for the highly mobile and transient construction workforce. 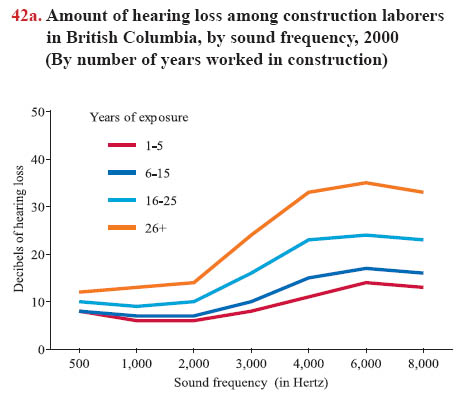 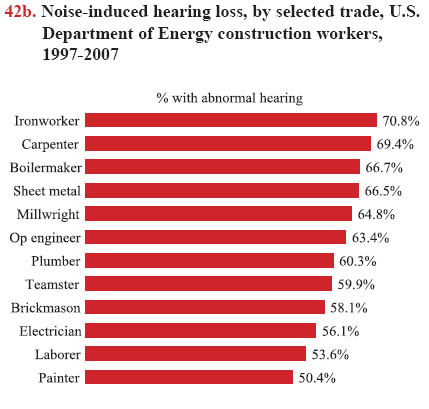 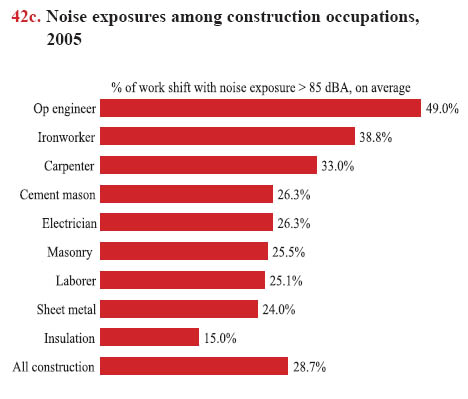 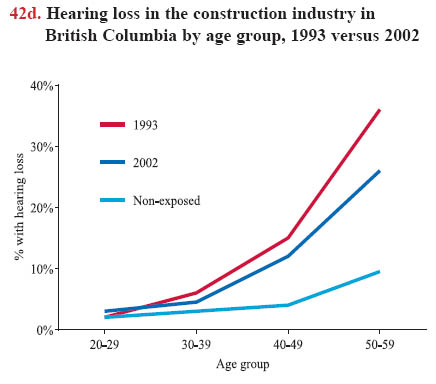 3. Richard Neitzel and Noah Seixas. 2005. The Effectiveness of Hearing Protection Among Construction Workers. Journal of Occupational and Environmental Hygiene, 2(4):227-238.

Chart 42b - Based on results from 100 or more examinations per trade (total of 9,047 DOE construction workers).