Section 40: Musculoskeletal Disorders in Construction and Other Industries

Work-related musculoskeletal disorders (WMSD) are injuries of the muscles, tendons, joints, and nerves caused or aggravated by work. Examples of WMSDs are joint sprains, muscle strains such as back or neck strain, inflamed tendons (called “tendonitis”) such as tennis elbow or rotator cuff syndrome, carpal tunnel syndrome, and herniated discs of the neck or lower back. Workers are at risk of developing WMSDs if they are exposed to a combination of physical force and repetitive motion, awkward or static body postures, heavy lifting of materials, contact stress, vibration, or extreme temperatures.1 A worker with a WMSD may face days away from work as well as chronic health problems.

Ergonomic solutions may help to reduce overexertion and, therefore, the risk of WMSDs. The construction industry has been slower to embrace these solutions than other industries. For example, many factories have reduced the weight of materials that are lifted by workers to less than 50 pounds. In contrast, loads weighing 80 pounds or more are commonly handled by workers at construction sites. Workers may not even pause to consider the risk of performing heavy lifting or carrying tasks, until they have suffered an injury. In reality, 80-pound loads should be the exception, not the rule. While a well-conditioned male may be able to safely lift an 80-pound load on occasion, the Liberty Mutual Manual Materials Handling Tables3 indicate less than 13% of men, and even fewer women, can do so repeatedly without increased risk of sustaining a WMSD. Redesigning jobs to lighten loads and eliminate repeated heavy lifting can help reduce cases of WMSDs caused by overexertion in construction. 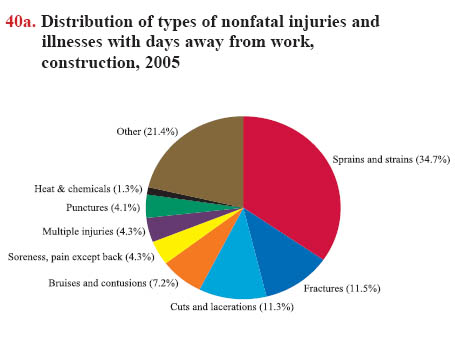 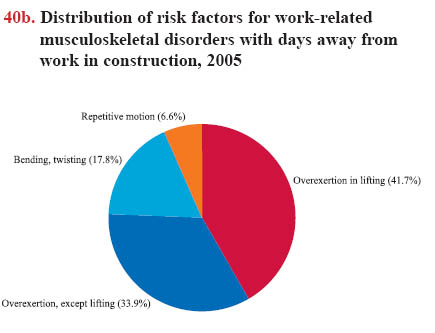 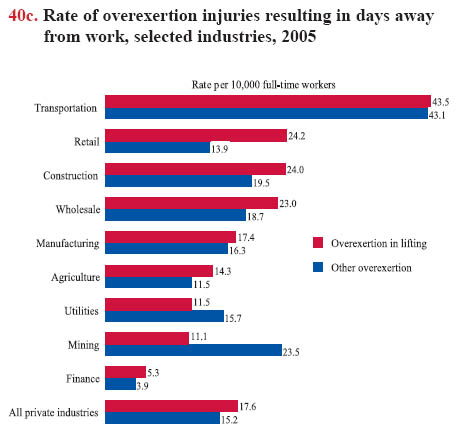 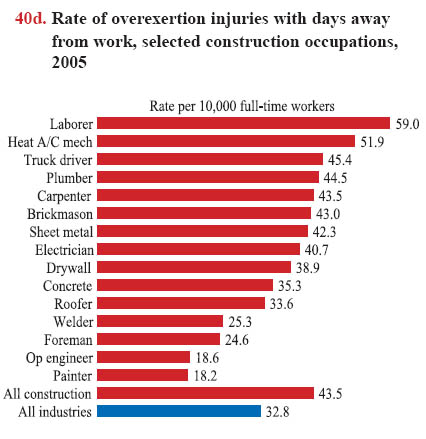 Note:
All charts - Data cover the private sector only and exclude the self-employed.