Section 33: Deaths and Nonfatal Injuries in Construction, by Type of Employment and Size of Establishment

From 1992 to 2005, a total of 16,068 construction workers died from work-related injuries, an annual average of about 1,147 deaths. The increased number of deaths in recent years was due mainly to the expansion of construction employment. The death rate, in fact, declined gradually over this period (see chart book page 32). Of the total number of construction workers who died, 2,434 (13.2%) were self-employed1 (chart 33a). 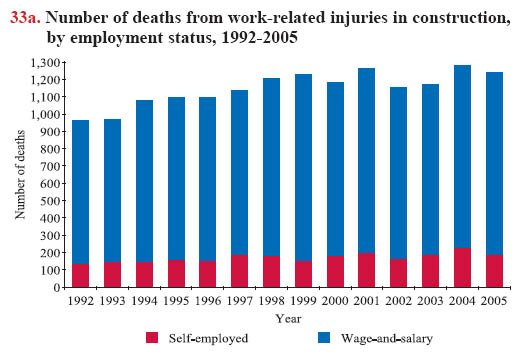 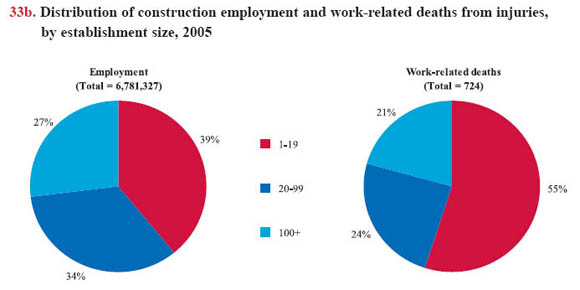 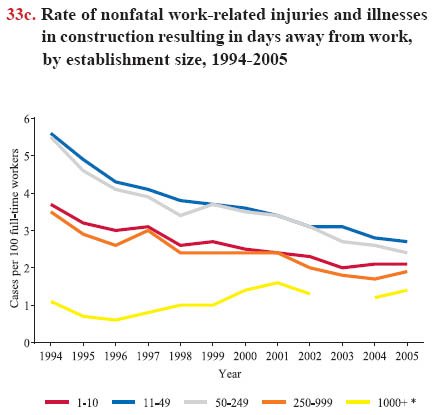 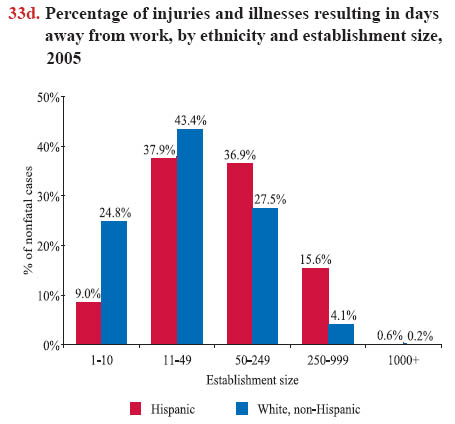 1. Includes owners of unincorporated and incorporated businesses or members of partnerships, and paid or unpaid family workers.

2. Deaths not reported by types of employment and establishment size were excluded.

3. The County Business Patterns (CBP) provides information for establishments with payrolls only. Thus, deaths among the self-employed were excluded from the Census of Fatal Occupational Injuries data to match numbers of employment from CBP for this analysis.

Chart 33b - A total of 1,243 deaths in construction in 2005. Deaths not reported by establishment size and deaths among self-employed workers were excluded. Wage-and-salary employment in construction totaled 6,781,327 based on the County Business Patterns (CBP) conducted by the U.S. Census Bureau.

Chart 33c - Rates are in terms of full-time work defined as 2,000 hours worked per year. *Data are not available for establishments with 1000+ employees in 2003.