Much of the data reported here are from the International Labour Organization (ILO),2 which compiles statistics on occupational deaths and injuries based on information supplied by relevant national organizations. The ILO also compiles basic information on the sources and survey methods used in each country (chart 31b). Because of wide variability in data collection and reporting, it is difficult to compare occupational deaths and injuries across countries beyond noting these general trends.

Another variable among injury and death rates is how the selected countries classify injuries from commuting accidents. Norway and the United States do not count workers' injuries from road traffic accidents as work-related if they are commuting, whereas such injuries are counted as work-related by several other countries. Italy does not technically include commuting, but provides compensation in most of the commuting accident cases; therefore such accidents are actually included in the data.

In addition to injury cases, it is essential to have numbers employed and hours worked to calculate injury rates that can be compared directly. However, obtaining the correct data from each of these countries for the calculations can be difficult. For example, the U.S. employment data are from household surveys (such as the Current Population Survey) and may not match the fatality data, which are collected from employers and other sources. Although all the selected countries reported hours worked per week for construction workers, very few countries reported weeks worked per year or hours worked per year, making it difficult to calculate comparable injury rates. Also, some countries, such as Norway, Finland, and Sweden, have a relatively small construction workforce (chart 31b) in which a small change in the number of fatalities can greatly affect that year's death rate.

Inconsistent methods of classifying industries are yet another source of data variability. The ILO asks the reporting agencies in each country to align their data with the International Standard Industrial Classification (ISIC), but many countries have their own industry classification systems. As a result, most countries' classification systems are similar enough to the ISIC to allow general comparisons at a broad level. The system may not be comparable to occupational injury and death rates within construction subdivisions across countries.

An analysis of nonfatal injury data has not been included because of wide variability in reporting and qualifying cases among countries.

In order to improve international injury data comparability, further research is needed to standardize definitions and measurement methods. Standardized occupational injury surveillance data would allow all countries, including those with very limited resources, to compute calculations according to a standard definition. Such efforts, in turn, could lead to a better understanding of the causes of occupational injuries worldwide and to develop better intervention strategies. 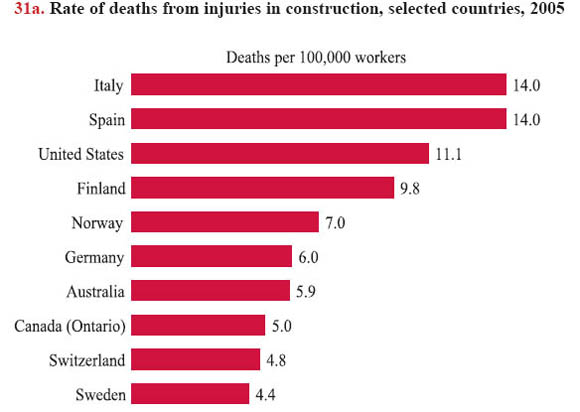 31b. Parameters and qualifications of construction fatalities, selected countries, 2005