Apprenticeships are important in construction because the work is craft-based, relying on skilled workers who have a great deal of autonomy. Many people enter construction crafts through apprenticeship programs, which offer on-the-job training under the close supervision of a craftworker, along with formal classroom instruction. Construction apprenticeships generally take three to five years, depending on the occupation (see Annex 2).

The Bureau of Apprenticeship Training at the U.S. Department of Labor sets quality standards that require apprenticeships registered with the federal government to include at least 1 year or 2,000 hours of on-the-job training and recommend 144 hours of formal instruction.1 Apprenticeship programs are sponsored either jointly by labor unions and contractors signatory to a collective bargaining agreement in the organized sector, or unilaterally by contractors in the non-union sector. For labor management apprenticeship training programs, a training fund is usually established in the collective bargaining agreement with the employer, and each contractor signatory to a local union pays into that fund. The fund dollars are managed through a joint trust fund with labor and management representatives. The apprenticeship program is run by the union with trained instructors teaching in regional centers; the program also provides hundreds of hours of on-the-job experience for apprentices. These union apprenticeship programs differ from employer-sponsored programs, which are organized and managed by individual contractors in the non-union sector.

Joint labor-management apprenticeship training programs are major providers of skilled labor. According to the data tracked by the Department of Labor's Office of Apprenticeship Training, Employer and Labor Services, from 1995 to 2003, for the 31 states for which data are available, around 70% of apprentices were enrolled in the joint labor-management programs.2 The overall number of new registrations increased from 33,245 in 1995 to 70,528 in 2001, and then dropped to 61,404 in 2003, coinciding roughly with recessions (chart 29a). The distribution of new registrations between the union and non-union programs was relatively stable over these years. The shares of joint programs were highest in Missouri (90.1%), Nevada (89.3%), West Virginia (88.2%), California (87.9%), Pennsylvania (83.1%), and Illinois (81.2%, chart 29b), reflecting relatively strong union market shares in these states (see chart book page 11).

In recent years, the proportion of new registrations of Hispanic origin increased with rapidly rising Hispanic employment in the construction industry (see chart book pages 15 and 16). The number of Hispanic registrations doubled between 1995 and 2003. The Hispanic representation in labor-management programs was much higher than in non-union programs, and the difference was even larger after 2000 (chart 29d). In contrast, the share of African Americans remained stable at around 9%, and slightly decreased during this time period. The number of Hispanic apprentices was highest in roofing and painting, while African Americans were heavily represented in roofing and operating engineer occupations. The share of women in construction apprenticeship registration was not only low, but declined in recent years, from 4.4% in 1995 to 2.6% in 2003. 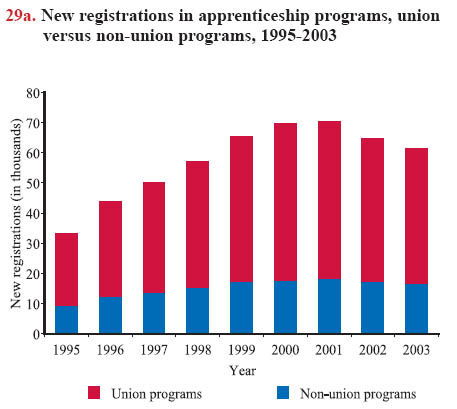 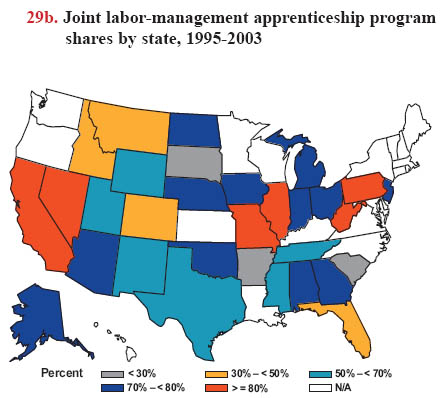 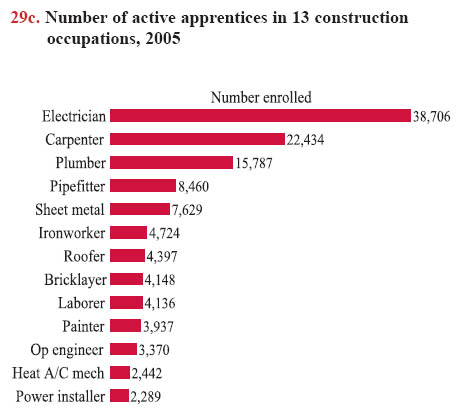 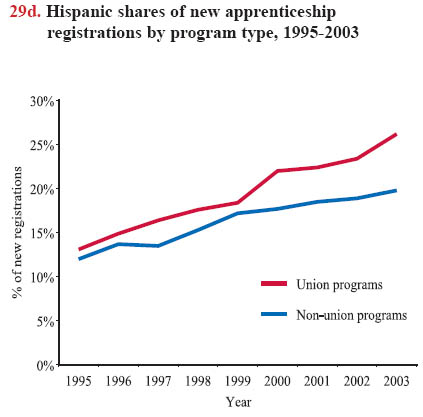 2. Cihan Bilginsoy. Registered apprentices and apprenticeship programs in the U.S. construction industry between 1989 and 2003: an examination of the AIMS, RAIS, and California apprenticeship agency databases. Working Paper No: 2005-09, University of Utah, Department of Economics, May 2005. Statistics used on this page were from this paper except where noted.

Source:
Charts 29a, 29b, and 29d - Cihan Bilginsoy. Registered apprentices and apprenticeship programs in the U.S. construction industry between 1989 and 2003: an examination of the AIMS, RAIS, and California apprenticeship agency databases. Working Paper No: 2005-09, University of Utah, Department of Economics, May 2005.