Section 28: Educational Attainment in Construction and Other Industries

Educational attainment of employees in construction is lower when compared with the level of educational attainment of all other industries combined; this is true also when construction is compared with other goods-producing industries, such as manufacturing and mining (chart 28a). In 2005, about 35% of construction workers had some post-secondary education, while 59% of the total workforce did.1 These estimates are based on the Current Population Survey (CPS), in which respondents are asked about the highest level of education they have reached, coding each level of formal education attained.

The level of education differs between men and women. Women construction workers are more likely to have higher educational attainment than men, and occupational distribution partly accounts for the difference.

While the CPS measures formal levels of training, it is less effective at measuring informal training – although most construction knowledge is learned on the job or as part of special courses, licensing, or certification requirements and apprenticeships (see chart book page 29). Training toward these levels may or may not include safety training. For instance, unions and employer associations require that their members take either 10- hour or 30-hour safety training courses mandated by the Occupational Safety and Health Administration (OSHA), and this training may or may not be counted toward an occupational or vocational associate's degree. 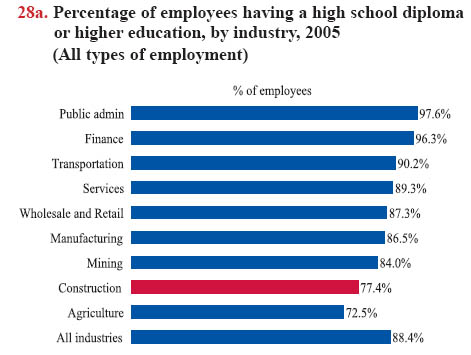 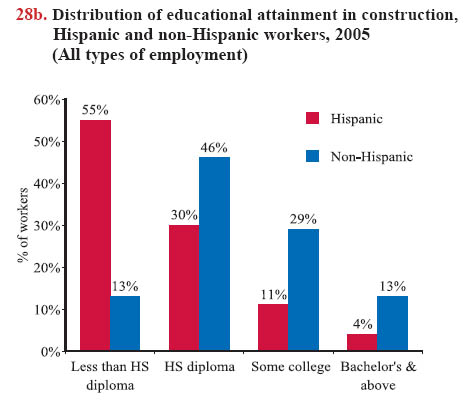 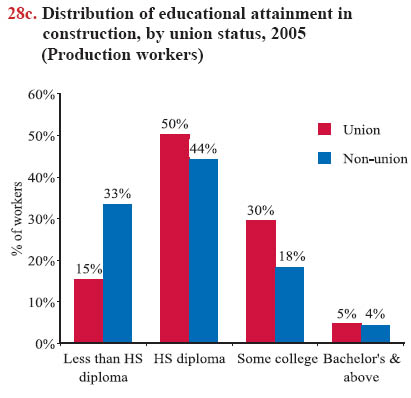 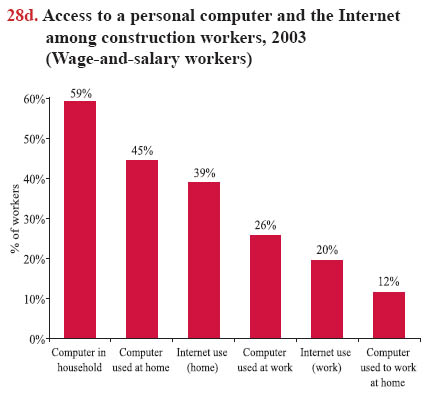 
1. The numbers used in the text (except for computer use): U.S. Census Bureau and U.S. Bureau of Labor Statistics, 2005 Current Population Survey. Calculations by CPWR Data Center.

2. The Center to Protect Workers' Rights (CPWR), 2002. The Construction Chart Book: The U.S. Construction Industry and Its Workers, Third Edition.

3. The numbers for computer use: U.S. Census Bureau, 2003 October Internet and Computer Use Supplement to the Current Population Survey. Calculations by CPWR Data Center.

Note:
Chart 28c - Production workers are all workers, except managerial, professional, and administrative support staff, and include the self-employed. Percentages may not add up to 100 because of rounding.

Chart 28d - Computer access includes all individuals living in households in which the respondents answered "yes" to the question, "Is there a computer or laptop in this household?" (Members of the households are considered to have access to the computers.) Internet access includes those who have at least one member using the Internet at home.