Section 21: Contingent and Alternative Employment and Job Tenure in Construction and Other Industries

In addition to reporting on contingent work, the same BLS survey collects data on alternative employment arrangements, which include independent contractors, on-call workers, day laborers, workers paid by temporary help agencies, and workers whose services are provided through contract firms to only one customer at that customer's worksite.5 About 2.9 million construction workers fell into one of the four types of alternative arrangements in February 2005, nearly 80% of whom were independent contractors6 and 14% were on-call workers and day laborers. The probability of working in an alternative arrangement ranked highest in construction compared with any industry (chart 21b). (A worker may be in both a contingent and an alternative work arrangement.)

Although some construction workers may prefer contingent employment, many would choose a permanent job if one were available. Among on-call workers and day laborers (see Glossary), about 40% said that on-call or day laborer was the only job they could find, and 11% said they hoped their current job would lead to permanent employment. 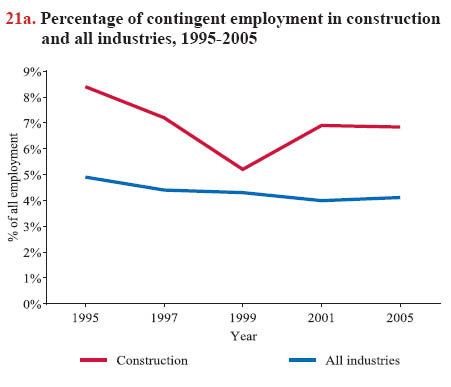 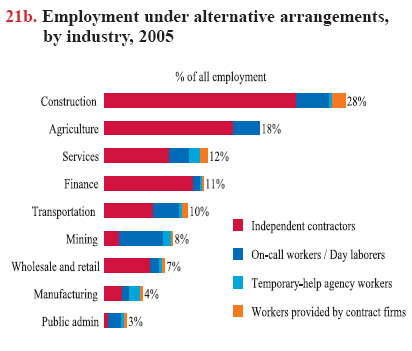 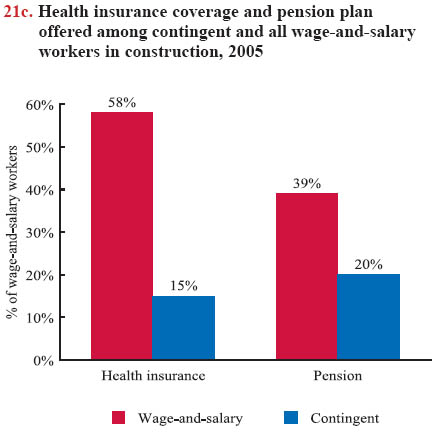 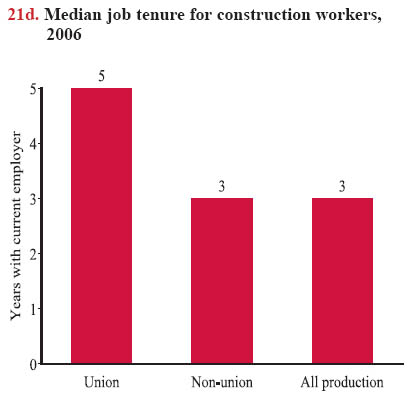 2. U.S. Bureau of Labor Statistics: "Contingent workers (Estimate 3) - Workers who do not expect their jobs to last. Wage-and-salary workers are included even if they already had held the job for more than 1 year and expect to hold the job for at least an additional year. The self-employed and independent contractors are included if they expect their employment to last for an additional year or less and they had been self-employed or independent contractors for 1 year or less."

4. Under their definition of "contingent workers," the BLS cannot capture the large contingent workforce in the construction industry.

5. Temporary help agency workers and workers provided by contract firms have an industry classification based on the place to which they were assigned.

Note:
Chart 21a - Based on the survey in February of each year. No data collection for 2003.

Chart 21d - The median is the midpoint; half the workers have a longer job tenure and half have a shorter one.