Section 17: Members of Racial Minorities in Construction and Other Industries

"Race," which characterizes the population based on physical characteristics, is separate from ethnicity, which considers cultural, linguistic, or national origin traits.2 So, for instance, people of Hispanic origin may or may not be included in racial minorities (see chart book pages 15 and 16).

Data provided here are from the American Community Survey (ACS), which classifies race as white, black or African American, American Indian, Alaska Native, American Indian and Alaska Native, Asian, Native Hawaiian or Other Pacific Islander, "some other race," or "two or more major race groups." "Some other race" includes all other responses not included in the race categories described above. "Two or more race groups" refers to multiracial people. The survey respondents were given the option of selecting one or more race categories to indicate their racial identities. An estimated 2% (5.6 million) of Americans identified themselves as members of two or more races in 2005.2

Due to changes in data sources and classifications, data showing race in this chart book are not directly comparable with data on race in the previous editions of this book. Caution must be used when interpreting changes in the racial composition of construction employment over time. 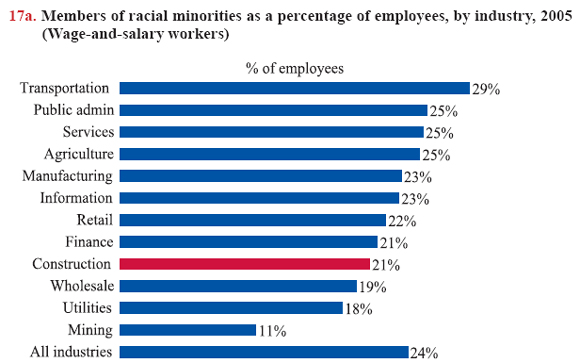 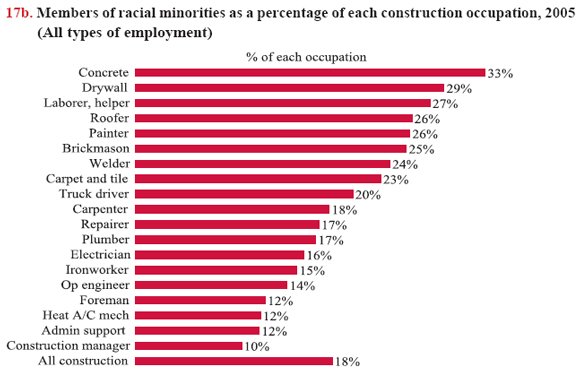 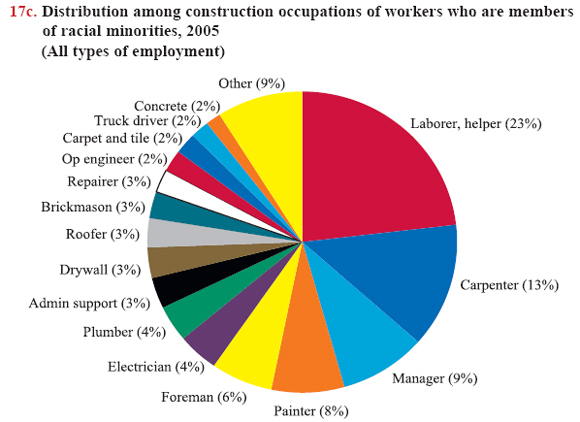 1. All numbers in the text are from the U.S. Census Bureau, 2005 American Community Survey and may not match up with the numbers from the Current Population Survey (see chart book page 9 charts). Calculations by CPWR Data Center.

Note:
All charts - Averages include all occupations from managerial through clerical/administrative support. "Racial minorities" are those who chose to identify themselves as black or African American, American Indian, Alaska Native, Asian, Native Hawaiian or Other Pacific Islander, or some race other than white.

Chart 17b - Other managers in construction (not listed) was 11%.