Describes a new tool that can be used to lift and hold heavy, metal pieces as they are welded together, making the job safer and more efficient. It is used to attach walers to piles in the ground. Part of a collection. Click on the 'collection' button to access the other items.

On a large Boston area highway construction project, members of the Piledrivers union must attach long, heavy beams - "walers" - horizontally to piles driven into the ground. To support the beams, they first weld a "walers' seat" to the piles. Made of the same metal as the beam, the seats weigh 264 pounds each.

"Usually it takes a couple of guys to hold the seat while another tack welds it onto the beam," Dan Tello explained. The piledrivers often have to trim the seat on the spot, because the piles are not in straight.

The beams go into underground areas that are dug out gradually. "We're in the mud and clay and it's slippery," said Eddy Girvan, a Piledrivers' foreman.


Welding a walers' seat an mean two or three workers lifting, maneuvering and holding heavy pieces of metal in awkward positions trying to avoid slipping and falling and burns from welding sparks. Sometimes a cherry picker or small crane might be available to do the lifting, but "it's not that steady," Girvan says.

The process: fit the job to workers' needs

Piledrivers know that welding waler's seats is a heavy, awkward job. How could they make it safer?

"Eddy came up with the idea," Tello and other Piledrivers said. After 35 years as a Piledriver, Girvan was most concerned about back injuries, slips and falls. He wanted something that could take the brunt of the lifting, hold the seat steady, and be mad easily.

"I've always gone on the assumption originality's unconscious plagiarism," Girvan said. "I've never seen one like that before." The idea probably came from a beam clamp, he said, but those clamps are too big for these walers and don't have tie-downs.

The Solution: the "Binford crab" clamp

It took about three hours to make a 35-pound clamp from scrap metal. The only new materials are two bolts.

The "Binford crab', as the workers call it, is about eight inches across by five inches high, and fits snugly over 14-inch wide seats. A ‘handle" on top lets workers attach a choker that can connect to a light-weight aluminum come-along or a chain for lifting by a mini-excavator.

One person can lift or guide the "crab" after putting the clamp width-wise around the seat and tightening it down. A second person can then weld the seat while the first worker holds it steady. 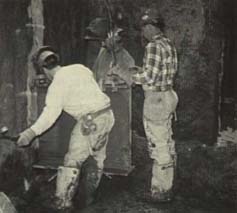 It does save time, but "we made the clamp so we don't have three guys slipping around and getting a hernia or losing a toe or hurting their back," Girvan said.

"We love it," Steve Routier said. "It makes it lot easier for us. There's less struggling in the mud. It's making things easier on our backs. Co-Worker Jerome Ciolino agreed. "It makes the job safer because the machine picks it up. If you're standing in the mud, you can't handle the seat by hand."

After three months using the "crab", Billy Juse was also convinced. "It works great because you can set it in to any angle you want." He also likes the time-saving and back-saving aspects.

The change was worth it, Girvan said. "If this is the way we have always done it, why aren't we still using sledgehammers or things like that?"