Powerpoint training for workers about the use of hard hats, see accompanying instructor's guide.
8/2009

Developed by the Division of Occupational Safety & Health (DOSH) for employee training
August, 2009

The following topics will be covered:

The human skull does a pretty good job of protecting the brain, eyes, ears and nose, but it has its limits. The force of a golf ball hitting your head at moderate speed, or simply walking into a hard object can fracture your skull. A stronger force can cause more severe injuries. Since head injuries can be very serious, head protection is required on certain kinds of jobs. Falling or flying objects are a common cause of head injuries.

Also, falling onto or walking into hard objects can cause serious head injuries.

These injuries can include scalp lacerations, neck sprains, concussions, skull fractures, brain damage or even death. 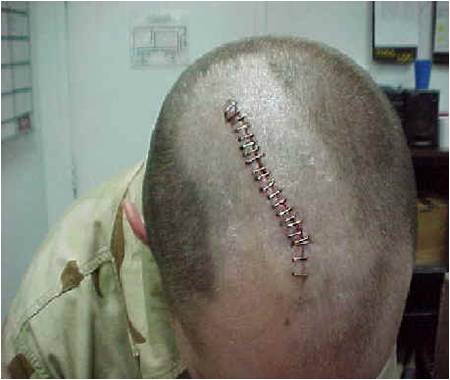 How hard hats protect you 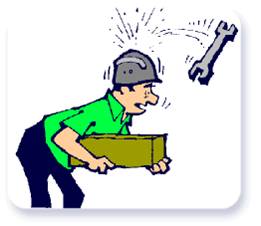 Hard hats protect you with the following:

This photo shows a hard hat that was hit by a large branch.
The hard hat took the impact and cracked instead of the person’s skull.
The victim was somewhat dazed for awhile, but had no serious injuries.
Obviously, hard hats cannot provide fail-safe protection from extreme
impacts or extremely large falling or moving objects, but they go a
long way in providing protection to your head.

Most hard hats provide protection from impact or penetration only. 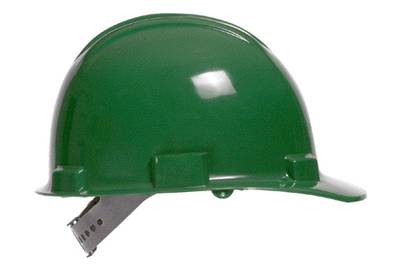 Some hard hats are designed to protect from lateral impact as well as top impact. 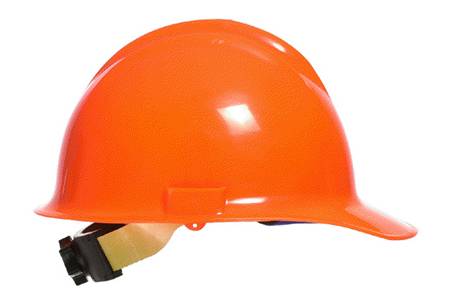 Some hats have a full brim for rain protection. 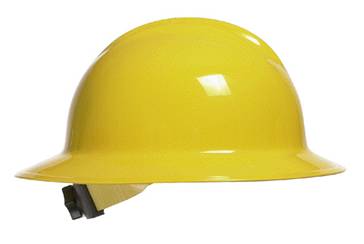 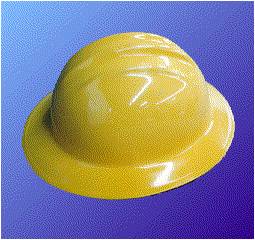 This special type provides both impact
protection and protection from either
high or low voltage electricity.

WARNING: You can never substitute a bump cap for a hard hat. 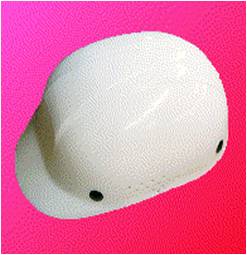 Where are hard hats required? 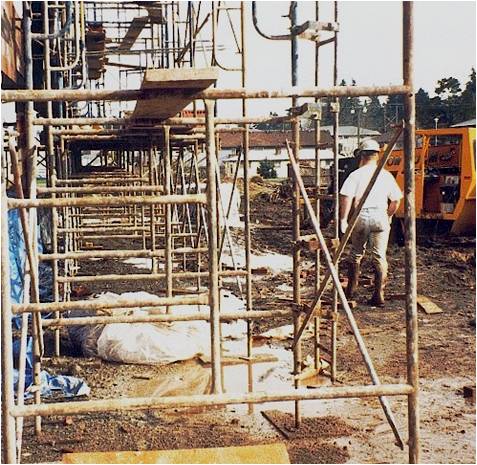 The DOSH construction safety rules require that all employees at construction sites must have hard hats available, although they don’t necessarily need to be worn except when they are exposed to overhead hazards. Obviously, a kerchief is not a substitute for a hard hat. 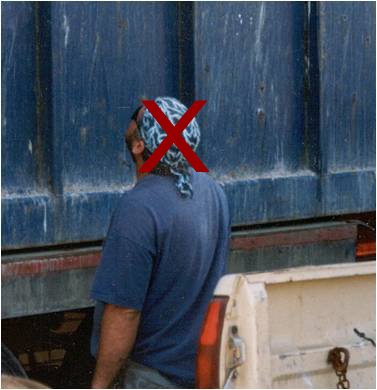 When are hard hats required? 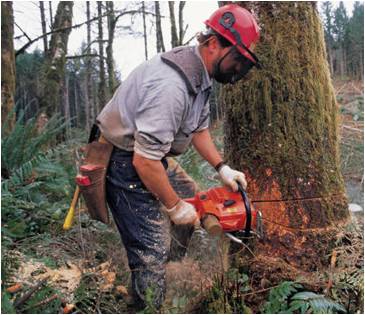 While working as a flagger, 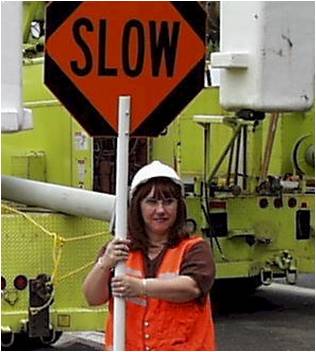 Work near live electrical conductors that could contact your head. 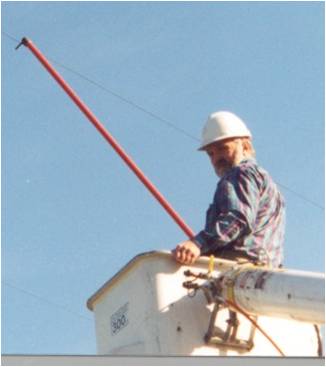 Hard hats are required by WISHA rules in all logging operations, unless working in a cab, canopy or under overhead protection (FOPS). Flaggers must wear high visibility hard hats that are white, yellow, yellow-green, orange or red. 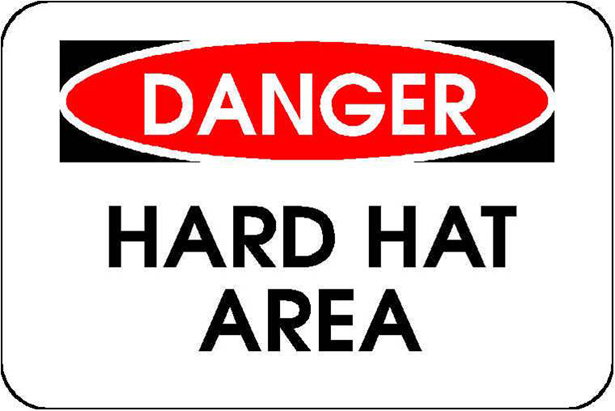 List your specific locations, jobs or tasks where hard hats are required at the worksite.

Adjust the suspension inside your hard hat so that the hat sits comfortably, but securely on your head.

A too-tight hard hat may give you a headache or be uncomfortable. A too-loose hard hat will fall off too easily. 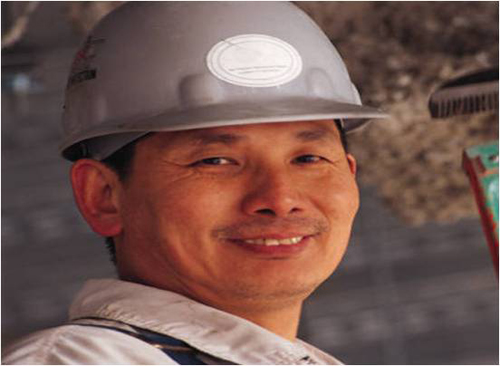 Try on, and adjust your hard hats.

Clean your hard hat as needed to remove oil, grease, chemicals, and sweat that can collect in and around your hat.  You can clean your hat with mild soap and hot water for 5-10 minutes. Rinse with clear water, wipe, and let air dry. Because prolonged exposure to sunlight and heat can damage your hat, store it in a clean, dry, and cool location out of direct sunlight. 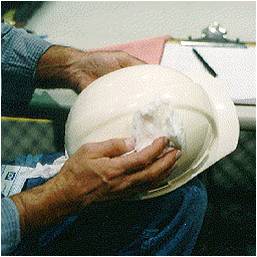 You can also follow the manufacturer’s directions for cleaning your hat. 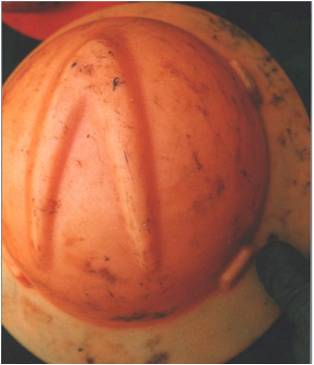 This photo of an orange hat shows degradation by
UV radiation after prolonged exposure to sunlight.

Inspect headwear before each use for any visible signs of dents, cracks, gouges, penetration, chalking, loss of gloss or any other signs of damage that might reduce the degree of safety originally provided. Replace hat when hairline cracks start to appear. Replace hat that has been struck by a forceful object, even if no damage is obvious.

Under normal use, hardhats will last two to five years. Our company policy is supply you with a new hard hat every (specify) years. Get replacement hardhats from (name person). Remove or destroy any hard hat if it’s protective abilities are in doubt.

Don’t use paint, solvents, gasoline, chemicals, or harsh cleaning materials on the shell. 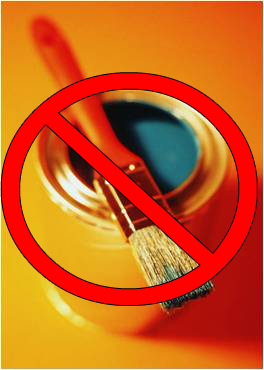 Don’t transport headwear in rear windows of vehicles since sunlight and extreme heat will weaken it. 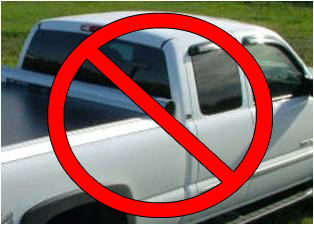 Don’t put anything in the space between the suspension and the shell. 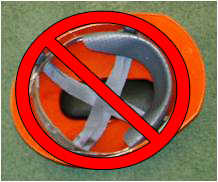 Paint, solvents chemicals and harsh cleaning chemicals will weaken the plastic, make it more susceptible to cracks and reduce electrical resistance. Paint will also hide cracks that may develop. Stickers are O.K. Since the space between the suspension and the shell acts as a shock absorbent, objects in that space would likely transfer the force of an impact to the head (such as the glasses case duct taped inside the orange hard hat photo.) 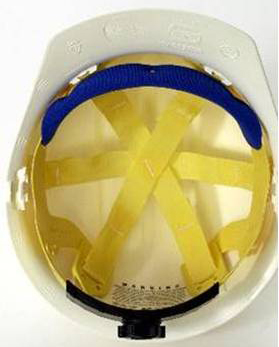 Perspiration from daily use of a hard
hat during hot weather may cause the
suspension to deteriorate in less than
a year. Replace the suspension when
needed.

Inspect suspension before every use. Look for cracked, torn or frayed straps.

Replace suspension when damage or defects are detected.

Suspensions will deteriorate over time from exposure to sunlight and chemicals, perspiration and hair oils. The normal service life of the suspension is about one year of regular use. The suspension may last longer with intermittent use.

Don’t wear a hard hat backwards unless you rotate the suspension. 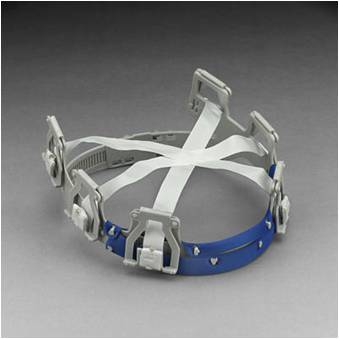 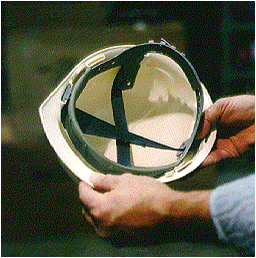 Hard hats have either a 4-point or 6- point suspension system as shown in the two
photos. Get replacement suspensions from (name person). Most newer hats have a
pivoting suspension adjustment knob that allows you to swivel a hat shell from front
to back and leaves the suspension in its most protective configuration.”

Relate your own story or read the following two true stories.

In Maine, a lineman was operating a digger truck, and a freak accident happened. After digging a hole, he rotated the boom around and because of obstacles, needed to put the boom nearly straight up. Suddenly, the pilot point of the auger fell and struck him on the head! Everyone involved agrees, had he not worn his hard-hat, he would have most likely been killed. After a few stitches, and some bumps and bruises, he is none for the worse. What happened? During digging, the bolt that holds the pilot point in place broke. It appears that the 38 pound unit was being held in place by mud and debris until it fell. The distance to impact was about four feet, enough to generate hundreds of pounds of force. The carbide tip actually cracked the hat (causing the cuts). However, the shock absorbing features of the hat protected his spine, and the impact resistance kept his head from being crushed. You may say he was lucky, but actually he was smart because he was wearing a hard-hat!

One of the most basic adages of construction safety is that hard hats save lives - but they only work when they're worn. This means 100% of the time - everywhere - no excuses. This adage was recently proven out by an incident on a painting project in Buffalo, New York. A worker was suiting up to begin blasting in preparation for repainting on a nearby bridge. He was not exposed to traffic and was not under an overhead hazard. Nonetheless, he was wearing his hard hat as required by the specs, and as directed by accepted safety practice and by good common sense.

Adherence to this simple rule probably saved the worker's life. Suddenly, without warning, a steel hatch blew off the top of the pressure blasting equipment which was several feet away from the worker. The 100 lb steel hatch flew several feet through the air and struck the worker squarely on the top of the head. The force of the blow knocked him to the ground, and as might be expected, he was dazed by the impact. He was transported to a nearby hospital as a precaution, but he was found to have no significant injuries, and was released without even being kept overnight. He is expected to be back on the job before the end of the week.

The lesson learned is very simple - HARD HATS SAVE LIVES! In this case, eyewitnesses emphatically report that the hard hat saved this worker from very serious and probably fatal injuries. The scars on the hard hat bear them out. However, hard hats can do their job only if they are worn all the time. Even in locations where the risk of head injuries is not apparent, unexpected incidents such as this equipment failure can occur with no warning. A hard hat laying on the front seat of a vehicle, or sitting on the ground, or even held in your hand, cannot provide any protection. Hard hats are a basic tool for the construction trade, and they must be worn all the time - everywhere - everyone! Your life depends on it!

When are hard hats required to be worn?

a) all the time

b) whenever the boss is looking

c) when there is an overhead hazard

d) when operating a backhoe

c) is the best answer. a) may also be the correct answer at your jobsite.

How often should hard hats be replaced?

a) after a major impact

b) when they look bad

d) when you go to a new construction job

a) is the correct answer