Describes the new 2002 steel erection standard and discusses the ways that it will make work safer for ironworkers, such as reducing falls 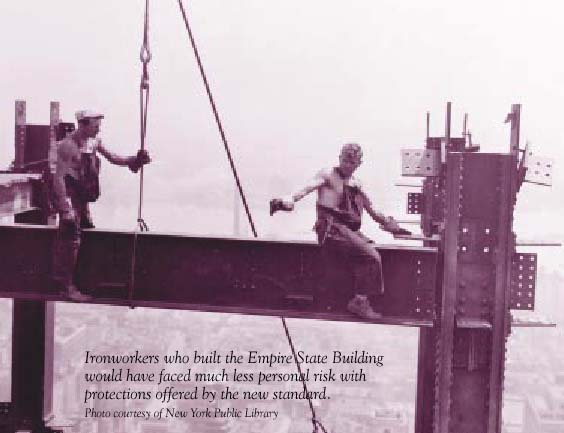 Remember those startling pictures of workers casually walking along beams or unguardedly connecting giant steel girders hundreds of feet above the ground as they erected the world-famous Empire State Building? What many of us do not know is that five men perished during construction of the 102-story landmark.

Although we certainly have come a long way in worker safety since this architectural and engineering treasure was completed 70 years ago, the nation's 57,000 ironworkers continue to face risks of serious injury or death. Every year an average of 35 ironworkers die during steel erection activities and 2,300 more suffer lost-work-day injuries.

OSHA's new steel erection standard, which becomes effective January 18, 2002, will help make America's ironworkers safer than ever. The new standard is expected to prevent 30 fatalities and 1,142 injuries annually and, as a result, save employers nearly $40 million a year.

The rule is one of the first OSHA standards developed under the Negotiated Rule-making Act of 1990 and the Department of Labor's negotiated rule-making policy. With negotiated rule-making, a committee composed of representatives from interested parties potentially affected by the rule develops a proposed standard. OSHA then publishes the proposal, holds public hearings, and receives written information from the public. After reviewing all available evidence, OSHA issues a final standard.

Members of the Steel Erection Negotiated rule-making Advisory Committee (SENRAC) developed the steel erection rule. The committee, established in May 1994, included representatives from organized labor, industry, public interests, and government. The parties worked out contrasting positions and sought common ground through face-to-face discussions. By airing disputed issues early in the rule-making process, the committee helped to develop a better rule that employers are more likely to comply with—reducing the need for enforcement and litigation activities.

The new standard protects all workers engaged in steel erection activities. It does not, however, cover workers on electric transmission towers, communications towers, broadcast towers, water towers, or tanks.

The revised standard is part of OSHA's ongoing commitment to keep workplace regulations current with evolving work practices and ensure that all workers are protected from the hazards posed by newer working conditions and technologies. OSHA's new requirements close gaps in current coverage, strengthen many existing specifications, and promote compliance by clarifying and consolidating current requirements.

The steel erection standard places special emphasis on the most serious hazards workers encounter during the steel erection process. These include hazards associated with working under loads; hoisting, landing, and placing decking; column stability; double connections; landing and placing steel joints; and falls to lower levels.

The standard's focus on these significant hazards will prevent many of the unnecessary injuries and fatalities that occur in the industry each year. For instance, a worker died in 1999 when he stepped into a 3-foot-square skylight hole and fell to the ground below. OSHA's new requirements for covering roof and floor openings might have prevented this accident. Covers for roof and floor openings must meet the following requirements: In another fatal incident, a worker fell more than 23 feet while walking on a steel rafter. He had finished bolting-up a steel purlin to the rafter and was walking back to get another purlin when he fell. Compliance with the new fall protection requirements could have prevented this accident. The final rule requires that, with some exceptions, employers provide fall protection equipment to workers engaged in steel erection on surfaces more than 15 feet above a lower level. This includes workers engaged in bolt-up activities.

According to Noah Connell, director of OSHA's Office of Construction Standards and Compliance Assistance, special provisions in the new standard concentrate on ensuring structural integrity.


"These buildings are strong once they're completed but are very precarious while they are being erected," explains Connell. "A number of these provisions are specifically designed to improve the structural stability during the construction process to prevent the buildings from collapsing or falling."

New structural stability provisions include requirements for installing four instead of two anchor bolts to prevent "hinging down;" mandatory testing of concrete for curing before steel columns can go up; installing "seats" or other devices for double connections; and informing ironworkers of modifications and repairs to anchor bolts.

In July, OSHA announced that the final steel erection standard will go into effect January 18, 2002, exactly 6 months later than the original effective date. The delay is designed to give the industry additional time to become familiar with the new requirements and provide training to employees in the construction industry. OSHA also is preparing material to assist the industry in the training process.

The 6-month delay also allows employers time to make the necessary changes to avoid costly prefabrication of already-made components and avoid long delays to projects that would affect all trades involved in the construction process. Components are typically fabricated 2 or 3 months before erection.

OSHA will not apply the component requirements of the new standard to the following two situations:

OSHA estimates that the final rule will save employers in the steel erection industry nearly $40 million a year in costs associated with lost-workday injuries, such as lost productivity, medical expenses, and insurance costs. Additional cost savings associated with avoided third-party liability claims and other legal remedies that offer relief from economic and personal loss are expected to be substantial.

Key Provisions of the Standard