Section 26: Health Insurance Coverage in Construction and Other Industries

In 2005, about 74% of wage-and-salary employees in the United States were covered by health insurance obtained at the workplace from their employer or union.1 That compares with 84% of the population who had health insurance coverage from any source.2 The estimates are based on the 2006 Current Population Survey (CPS) Annual Social and Economic Supplement (March Supplement, formerly Annual Demographic Supplement), which is the most consistently cited source of data reporting numbers and characteristics of people with and without health insurance.

Several factors contribute to the relatively low number of construction workers with insurance coverage. One is the prevalence of small companies in the industry. Companies having 25 or more employees are more likely to provide health insurance, on average, than smaller companies (chart 26b), and about 40% of construction employees work in establishments having fewer than 20 employees (see chart book page 3).

Generally, the construction industry has increased its reliance on contingent and alternative employees (see chart book page 21), and these workers have a much lower rate of health insurance coverage than most wage-and-salary workers. Generally, racial minorities are less likely to have health insurance, and this trend prevails in construction. Among production workers, 46% of minorities, compared with 50% of nonminority workers, have insurance through their employment. Although women in general are less likely to receive employment- based insurance, 73% of women who are wage-and-salary workers in construction have health insurance coverage through their employment, while 57% of men do.

Health insurance coverage varies also by construction occupation, in part because of different trends in average firm size, unionization rates, and independent contracting practices among occupations (chart 26d). Union construction workers are covered by multiemployer health and welfare plans, which are negotiated during collective bargaining with contractors. All contractors that have signed the agreement pay into a fund managed jointly by employer and union representatives, enabling small enterprises to provide benefits for workers. 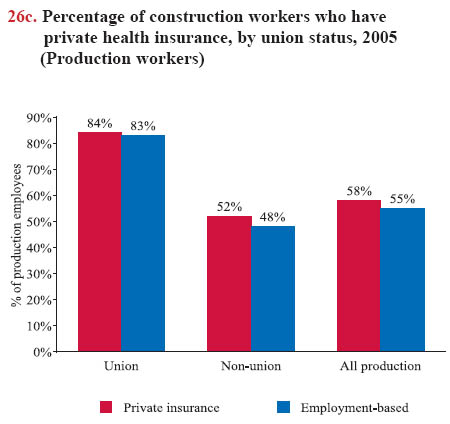 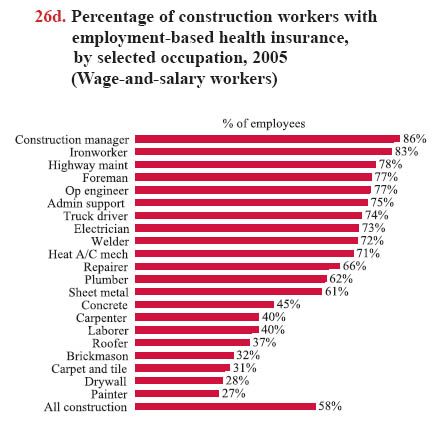 Note:
Chart 26c - Production workers are all workers, except managerial, professional, and administrative support staff – and include the self-employed.